Actor’s suit says his Tesla sped up on its own

Actor’s suit says his Tesla sped up on its own 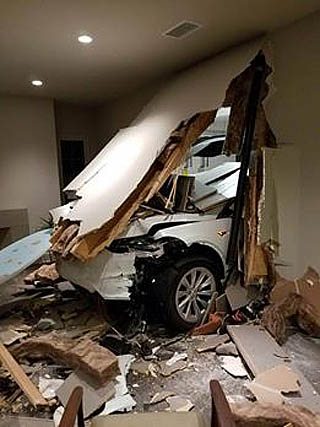 Korean celebrity Son Ji-chang is suing U.S. electric carmaker Tesla Motors for what he says is sudden unintended acceleration of his Model X, which crashed through the garage wall of his house and into the living room while he was trying to park. Tesla Motors says, however, the accident is Son’s fault.

Son’s lawsuit filed in U.S. District Court for the Central District of California on Friday is seeking a class-action status, after discovering several more cases were reported to the National Highway Traffic Safety Administration regarding the Model X, Tesla’s premium SUV model.

The 47-year-old singer-actor, who lives in Irvine, California, said the accident happened in September when he was trying to drive into the garage one evening with his son in the passenger seat.

“I checked the garage door opening and was about to enter the garage,” Son wrote on his Facebook page Sunday with photos of the incident.

“Then the car made an abrupt roar before breaking through the garage wall and got shoved into the living room. The door didn’t open as I was trying to check if my kid was OK. He rolled down the window to evacuate and then helped me get out of the car.”

Son said the accident came from a sudden unintended acceleration and asked the carmaker for compensation, yet Tesla Motors didn’t agree.

Tesla said the accident happened because Son mistook the accelerator pedal for the brake.

“The evidence, including data from the car, conclusively shows that the crash was the result of Mr. Son pressing the accelerator pedal all the way to 100 percent,” Tesla said in a statement.

The Silicon Valley-based start-up also said that Son threatened to use his celebrity status in Korea to receive financial compensation.

“However, the evidence clearly shows that the vehicle was not at fault.”

Tesla also said that its vehicles are equipped with sensors to prevent pedal misapplications including an Autopilot system which Tesla says can distinguish potential pedal misapplication events from normal cases when a driver intentionally presses the accelerator.

“In cases of unambiguous pedal misapplication, the vehicle cuts torque to mitigate the effects of the driver’s error.”

Son slammed the auto company for its response in the aftermath.

“I asked if I can take a look at the black box but was refused,” Son said.

This is not the first time Tesla vehicles have been under fire for sudden acceleration.

In June, another Irvine resident reported a sudden unintended acceleration with his Model X. In September, a similar case happened in Florida when a Model S crashed into a gym while slowing to park. After analyzing their logs, Tesla Motors said both cases were from the drivers mistaking the accelerator for the brake.