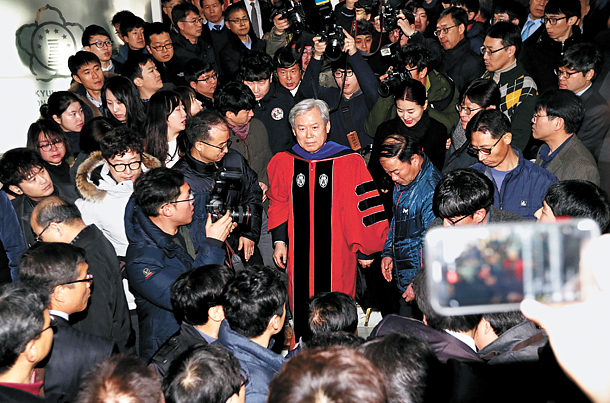 Kim Sang-dong is inaugurated as the 18th president of Kyungpook National University (KNU) in Daegu Monday morning amid protests by professors, alumni and students who are angered that the government appointed him over the first-choice candidate for the position. [YONHAP]

The inauguration of Kyungpook National University’s new president has drawn backlash from professors, alumni and student organizations, who claim the appointment is the result of unjust meddling by the Blue House and Ministry of Education.

Kim Sang-dong, a 58-year-old mathematics professor of the school, was inaugurated as the 18th president of Kyungpook National University (KNU) in Daegu Monday morning.

The ceremony took place as a group of about 70 professors, students and alumni gathered in front of the Global Plaza on the university campus, where the inauguration ceremony was held, to protest his appointment.

Unions such as the Professors for Democracy and the Korea Irregular Professor Union, as well as the university’s student council, oppose Kim’s appointment because he was selected over the schools’ first choice candidate, another professor of the school, without a clear reason being given.

The protesting groups convened a committee calling on the “democratic normalization of KNU” ahead of the inauguration ceremony, demanding that Kim’s inauguration be postponed.

“It is difficult to accept that the Blue House and the Ministry of Education appointed the second-choice candidate as president,” they said through a statement.

“It is not right to enforce the inauguration during a period when it is being revealed that the Blue House’s human resources team has been making illegal appointments at national universities and institutions across the board,” the statement said. “The National Assembly and independent counsel are in the process of investigating presidential appointments at KPU and other national universities. The inauguration of the president needs to be postponed until after the results of these investigations are revealed.”

The independent counsel team is in the midst of investigating the influence-peddling scandal surrounding President Park Geun-hye’s confidante, Choi Soon-sil.

One member of the committee opposing the appointment, Park Ji-won, a 26-year-old student studying biology education, said, “Until the issue of the appointment of university presidents is resolved, we plan to continue to hold protest rallies.”

Kim previously held administrative posts at KNU, including as director of planning. He is a graduate of KNU’s department of mathematics and received his doctorate at the University of Wisconsin-Madison. He has served as a mathematics professor at KNU since 1993.

Last October, the Education Ministry appointed Kim as the new president of KNU, a position left vacant since 2014.

Kim Sa-yeol, a 61-year-old professor of life science at the university, was selected as the first choice by the schools’ indirect election system.

“This is a situation that occurred because the authority to appoint the university president was exercised wrongly by President [Park Geun-hye],” he told the JoongAng Ilbo. “I plan to file a lawsuit against President Park Geun-hye this month to set straight the appointment authority.”

Kim Sa-yeol claims his appointment was “strongly opposed” by Woo Byung-woo, former senior presidential secretary for civil affairs, on Sept. 21, who was in support of the second-choice candidate.

Between 2007 and 2008, Kim Sa-yeol served as head of the Daegu Civil Society Organizations Network in Korea, comprising some 100 civic organizations in Daegu. Some speculate that he was not appointed president of the school because of his background heading a civic organization.