Celebrating new boundaries in art : A look at some of the year’s most-anticipated museum exhibitions

Celebrating new boundaries in art : A look at some of the year’s most-anticipated museum exhibitions 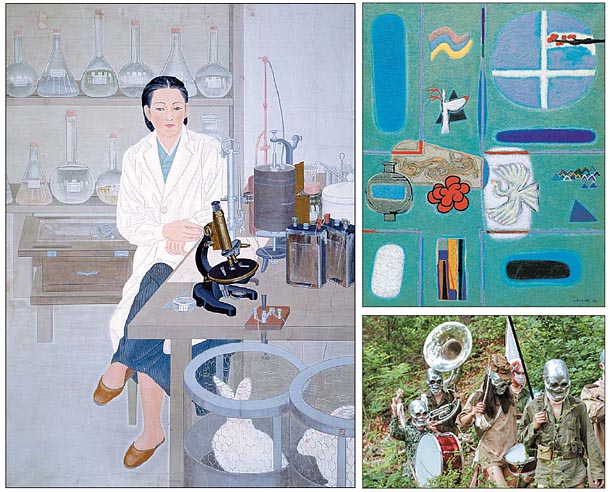 Clockwise from above, “Research” (1944) by Lee Yu-tae is part of the “New Women” exhibition to start in the MMCA’s Deoksu Palace branch in October; Kim Whanki’s 1957 painting “Song of Eternity” is part of his retrospective that will start at Leeum in April; Park Chan-kyong’s 2016 video “Citizen’s Forest” will be shown at Kukje Gallery in May. [MMCA. LEEUM, KUKJE GALLERY]

This year, the two leading public museums - the National Museum of Modern and Contemporary Art (MMCA) and Seoul Museum of Art (SeMA) - will hold architecture exhibitions to celebrate the 27th UIA Congress Seoul. The Switzerland-based UIA, or International Union of Architects, will hold their general meeting at COEX and Dongdaemun Design Plaza from Sept. 3 to 10 under the theme of “Soul of the City.”

Additionally some film directors, designers and calligraphers will be celebrated in major art museums, extending the boundaries of art further and further.

On the other hand, large-scale retrospectives of masters of modern and contemporary art such as Korean abstract painter Kim Whanki (1913-1974) and British pop artist Richard Hamilton (1922-2011) are also scheduled for this year.

Here are the timetables of some art exhibitions selected by the Korea JoongAng Daily. Most of the titles here are working titles.

The solo show celebrates Ahn Sang-soo, 64, dubbed the “godfather of Korean typography.” Not only his famous typeface designs but also materials from his alternative school for design “Pati” in Paju, Gyeonggi will be presented.

Kim Whanki has always been regarded as one of the most important Korean modern artists by art critics. But the public’s interest in him soared afresh last year, as his abstract paintings, in particular, so-called dot paintings created in his New York period (1963-74) renewed the record price of Korean artwork ever auctioned three times. Leeum plans to present the representative works that Kim created throughout his career, to help the public understand how his art evolved.

The exhibition will feature new works by Park Chan-kyong, one of Korea’s major contemporary media artists.

The exhibition, linked to the 27th UIA Congress Seoul, will provide the viewers a glimpse into contemporary architecture and its relations with art.

Korea’s Architecture Movements in the 1990s and after

The exhibition is about the architectural movements between the late 1980s and the early 2000s in Korea.

The Beauty of Korean Traditional Calligraphy

In Leeum’s first-ever exhibition concentrated on calligraphy, the museum will explore the aesthetics and philosophy carried by old ink calligraphic works and their relation with Korean ink paintings and influence on Korean modern and contemporary art.

The exhibition features about 200 pieces of paintings, posters and photography that depict the images of Korean modern women in the early 20th century.

The first-ever retrospective of the British pop artist in Asia features 80 of his most important pieces.