The influence of color in enforcing gender

The influence of color in enforcing gender

Through “The Pink & Blue Project” photographer Yoon Jeong-mee takes pictures of girls and boys with their pink and blue belongings. [YOON JEONG-MEE]

When a newborn is on the way, most visitors come by with their hands full of baby clothes or toys. Interestingly, like it’s a tacit rule, baby girls receive pink gifts while boys get everything in blue. This phenomenon caught the eye of 47-year-old photographer Yoon Jeong-mee. Most girls she knew owned pink clothes and toys, while boys were surrounded by blue-colored belongings. She wondered why pink and blue are such gender-related colors. In order to bring this odd phenomenon to the surface, Yoon started shooting a series of photos under the name “The Pink & Blue Project.”

The project started in 2005 with her 5-year-old pink-loving daughter. If she had a choice, she would always choose pink. But her daughter wasn’t the only one. Many other girls around the world crave pink dresses. On the other hand, few boys would choose to own a pink toy. Some are even teased for wearing pink.

Yoon viewed this as not just a matter of taste, but as the result of social influence. She wondered if children loved pink and blue out of instinct, or because of a social compulsion that they are not aware of. 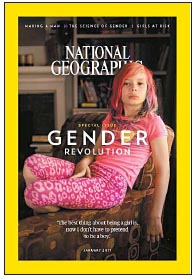 Yoon’s “The Pink & Blue Project” appears as one of the stories in this month’s National Geographic.

These pictures of boys and girls surrounded by their blue and pink things resemble the old custom of classifying genders through color,” said Yoon. “It seemed like girls must buy everything in pink. It was almost like a warning to girls who prefer blue to think again.”

The project recently received attention from National Geographic, an international documentary magazine, for Yoon’s portrayal of sexism. This month’s magazine deals with gender issues under the theme name “Gender Revolution.” Yoon’s project appears as one of the stories.

In the National Geographic story, Yoon is quoted as saying “I wanted to show the extent to which children and their parents, knowingly or unknowingly, are influenced by advertising and popular culture. Blue has become a symbol of strength and masculinity, while pink symbolizes sweetness and femininity.” 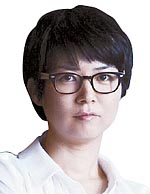 The photos seem cute and lively at first glance, but viewers could not resist the bitter feeling the pictures give. The cute part is only a strategy to attract attention. Yoon’s real aim lays in the photos’ bitterness.

“Through these photos, I wanted to show the ‘color code’ that resides in our society. This might even be the result of commercial spirits that are prevalent in our capitalistic society,” she said.

The National Geographic story also quoted Jo Paoletti, a University of Maryland American studies professor, as saying “The United States has contributed significantly to the ‘pink for girls and blue for boys’ phenomenon. It’s been fueled by the pervasive color palettes of Barbie, superhero movies, and other staples of American childhood. And it has had the same kind of staying power as ‘traditional ideas about sex, gender, and sexuality.’”