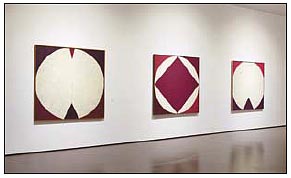 Dubbed the “abstract painter of lyricism,” Ryu’s abstract paintings in the 1960s have Expressionist qualities. Their titles suggest a certain day’s season, weather, or mood, which seem to have inspired the paintings.

On the other hand, Ryu’s paintings in the 1980s and 90s show color fields of geometric shapes. The paintings in these periods mainly use unique violet and wine colors of low chroma.

According to the gallery, Ryu was very indifferent to selling his paintings, while focusing on teaching art and boosting the activities of artists’ circles. He served as a professor at Ewha Womans University and Seoul National University.

“So, whereas he is well known and appreciated within the artists’ world, he is underestimated in the art market,” Do Hyung-teh, CEO of Gallery Hyundai said.

To Jan. 15: The annual exhibition features the four artists nominated for the 2016 “Korea Artist Prize” granted by the museum and the SBS Foundation. The finalists are Kim Eull, Back Seung Woo, Ham Kyungah, and the team of mixrice (Cho Ji Eun and Yang Chul Mo).

A month and a half after the exhibition started, mixrice was announced as the winner of the 2016 prize. The team deals with the issue of migration, in particular the reality of migrant workers in Korean society. 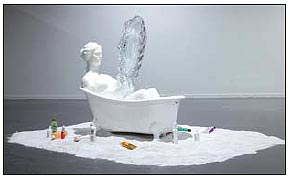 X : KOREAN ART IN THE NINETIES

To Feb. 19: The exhibition focuses on the 1990s, in which post-modern art started in earnest in Korea.

“The 1990s have already become a new cultural keyword through a recent TV soap opera ‘Reply’ series gaining lots of popularity,” the museum said on its web site. “Summoning the 1990s in the name of contemporary art, this exhibition focuses on the paradigm shifts of contemporary art - Postmodernism and Globalism - and focuses on its influence on today’s art and dynamic relations. “

The works encompass Knight’s very early black-and-white straight photos of skinheads and their subculture in the late 1970s; his digitally-modified fashion photography in the 1990s; and his latest moving images and films about fashion. These serve to highlight his diverse oeuvre.

IN THE FOOTSTEPS OF THE ARTIST

To April 29: The exhibition features 400 documents, photos, artifacts, drawings and paintings that provide viewers with a glimpse into the lives of Korea’s important modern artists, including Kim Ki-chang and Lee Ufan.

They have been donated to the museum by the artist themselves or collectors.

Indefinitely: Yeongang Gallery, the first-ever art gallery within the civilian control zone adjacent to the North Korean border, opened in May with a solo show by artist Han Sungpil. It features 11 of his photos, including “Observation,” and video works including “Uncanny Serenity.”

The gallery, located next to an air-raid shelter, was once a museum dedicated to showing North Korea’s attacks on the south.