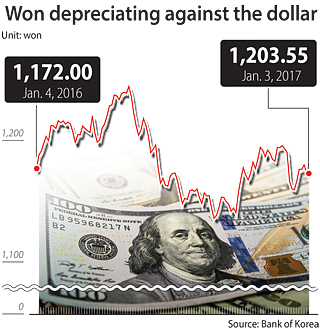 The won’s value has been weakening against the dollar since the third quarter and has picked up momentum since the U.S. Federal Reserve not only raised interest rates for the first time in a year but also projected three more increases this year.

In the first two trading days of this year, the won barely moved but remained above 1,200 against the dollar. The won appreciated against the greenback on Tuesday, closing at 1,203.55 from Monday’s 1,208.50.

“I’ve never been an aggressive investor and the only investment that I have made was saving my salary on bank deposits,” Lim said. “But with my children growing up I’ve realized living only on savings, especially with interest rates so low, is not enough. But real estate investment needs a lot of seed money, which means I would probably have to take out loans and this is a problem because I’ve already borrowed loans from banks for our jeonse [long-term deposit] apartment while I’m too much of an amateur to jump in on stock markets.

“But since late last year I realized how the won was depreciating, which made me start taking interest in dollar deposits.”

According to a Bank of Korea study, foreign-currency based deposits shrank for three consecutive months between September and November largely because deposit holders were withdrawing to cash in on the weakening Korean won. Foreign currency deposits shrank from $67.3 billion in August to $61 billion in November, a 9 percent decline. Of the total, foreign currency deposits held by individuals accounted for 82.7 percent, or $50.5 billion, as of November.

“Individuals, who are more sensitive to the changes, seem to have been selling off their dollar holdings to profit from the depreciated won value,” said a Bank of Korea official.

However, Korean think tanks consider the current depreciation momentum temporary and think it will likely settle below 1,200 won.

“Because of the uncertainties surrounding [U.S. President-elect] Donald J. Trump policies and the U.S. Federal Reserves’ monetary policies, it is likely that the pressure of depreciation on the won-dollar exchange will likely continue in the first quarter,” said Yoo Dong-wan, an analyst with NH Investment and Securities. “However, once Trump’s policies start realizing, the inflation pressure eases and the U.S. mild hike on its interest rates starts showing after the first quarter, the appreciation of the U.S. dollar will likely start to weaken.”

NH Investment and Securities predict the won will trade between 1,150 and 1,230 in the first quarter.

Some market analysts projected that the won depreciation will likely ease once the unexpected results of the U.S. election wear off.

Many Korean think tanks, including LG Economics Research Institute and the Korea Institute of Finance, projected the won will be traded between 1,155 and 1,195 versus the dollar. The Woori Finance Research Institute thinks the won could appreciate to as much as 1,1000.

The Bank of Korea governor also tried to downplay the sharp depreciation with the exodus of foreign investment. “I understand that there are concerns in the [financial] market that if the U.S. Federal Reserve continues to raise the interest rates, the difference [with Korea’s interest rates] will narrow and may even end up in a reverse situation that could lead to [foreign] investment exodus,” Lee Ju-yeol said last month.

“Even if the interest rates gap [between Korea and the U.S.] narrows, at this point I don’t think the possibility of a sudden massive investment exodus to happen is likely. The liquidity resulting from the current account surplus and the sufficient amount of foreign reserves, the overall soundness from external factors is good, and therefore there is no need to worry about a sudden exit [of foreign investments}.”