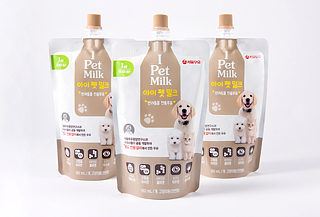 The Seoul Dairy Cooperative has released a milk product for pets jointly developed with veterinarians.

The new product will be made from raw milk and produced in a separate facility from milk meant for human consumption. Since many pets lack lactase, the enzyme that helps break down lactose found in milk, conventional milk products could cause vomiting and gastrointestinal trouble. Seoul Dairy’s “pet milk” has been designed so that the lactose decomposes during digestion, the company said.

A 180-milliliter (6-ounce) pack of milk will cost 2,300 won ($1.90) at large discount chains, similar to the price of import counterparts. They will go on sale on Jan. 11 in pet shops, hospitals and supermarket chains.