‘Thaad deployment must not be affected,’ says former envoy

‘Thaad deployment must not be affected,’ says former envoy 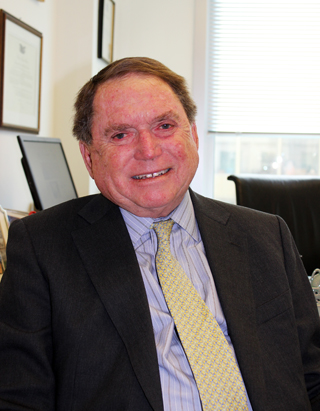 Hubbard, who serves as chairman of the New York-based Korea Society, sat for an interview with the JoongAng Ilbo in Washington on Dec. 12, where he said it would be a “big mistake” to withdraw the decision to deploy the U.S.-led antimissile system in Korea.

He added that such a decision would harm the Korea-U.S. alliance, as Washington transitions to a Donald J. Trump presidency and Seoul elects its next leader.

Hubbard, a senior director at the international strategic advisory firm McLarty Associates, served as the top U.S. envoy to Seoul from 2001 to 2004, during the Roh Moo-hyun administration.

In terms of comparing the impeachment of President Roh with President Park, Hubbard said, “I do think that this situation is quite different,” citing that the main difference seems to be in terms of public opinion and anger that “a shadowy woman,” meaning Park’s close confidante, Choi Soon-sil, had so much influence.

A career foreign service officer for nearly four decades, Hubbard also previously served as ambassador to the Philippines and as a principal negotiator for the 1994 Agreed Framework with North Korea, which aimed at ending the regime’s nuclear weapons program.


Q. What kind of impact will the gap in political leadership have on the deployment of the Thaad system?

A. I think your government has made it clear it plans to go ahead. You do still have a government. And I saw in one of the newspapers that our combined commander in Seoul said the deployment will go ahead. You’ll have a new election if President Park is removed — you’ll have another election sometime in the next six to 10 months — and I would hope that the new government would recognize the importance of the Thaad deployment.


What if the decision to deploy the Thaad is withdrawn?

That would be a big mistake. It is valuable to Korean security. We also don’t think we should allow China to tell us how to manage our alliance between the U.S. and South Korea. So I think it would be unfortunate if the decision was changed. It would diminish our capacities, and therefore be harmful to the alliance.

And just in terms of perceptions, the idea that China could veto something that’s in our aim toward North Korea, and in our common interest, would be unfortunate.


Why do you think China is opposed to the deployment of Thaad?

China very much does not want Thaad deployment. That’s in part a military objective that threatens China’s defense. But I think it’s totally political. I think they see it as strengthening the Korea-U.S. alliance, and they don’t want to see that.


What do you think of the candlelight vigils in Korea that led to the impeachment of the president?

These very large candlelight demonstrations are a frequent part, frequent manifestation of Korean democracy, and I think more than in most countries, the general public weighs in on politics and the national interest in very dramatic ways.

I was ambassador to Korea when the two young girls were killed, and we saw very large, basically anti-American demonstrations at that time. I also remember several years ago, the big demonstrations over beef imports, which also were very large.

I happened to be in Korea when this issue first broke out after President Park made her first apology. And it was apparent to me that it was a very big issue. I didn’t know whether it was going to lead to an impeachment, but it was clear to me that Koreans were very upset by what they had seen about their president’s activities, so I wasn’t totally surprised when this led to an impeachment.

But I was also ambassador to Korea when Roh Moo-hyun was impeached. And I remember then the Constitutional Court overturned the impeachment judgment, and he returned to office. But I do think this situation is quite different. Public opinion, I think, is very different in this case.

My sense is that the impeachment of Roh Moo-hyun was very political. The conservative political parties were trying to remove him from office, and the public seemed to actually be behind President Roh. This time, obviously, the public is very much against President Park for what they perceive she has done. So I think the dynamic is different this time.


Why do you think the people are angrier this time than before?

The Korean public seems to be upset that this kind of a shadowy woman had so much influence over the president, and people keep saying that they’re ashamed of that … of the idea that Madam Choi was almost always in the Blue House and making decisions, helping the president make decisions even though she had no official role. I think Koreans get very upset with the idea of special favors for getting into universities and her daughter seems to have been exposed.


With the absence of a president here, how do you think this will impact the Korea-U.S. alliance?

It’s unfortunate timing. You know, we have a new president coming into office and there will still be uncertainties in South Korea when he comes in.

So, it’s going to be a little awkward starting out the new relationship. Also, there is a very heightened concern about North Korea and worry that the political vacuum in South Korea could complicate dealing with North Korea, and that North Koreans might take advantage of that.

There are some genuine worries, but I think Americans understand that it’s a very domestic political thing in Korea. We have our domestic politics, too: the surprising election of Donald Trump as president.

But I think we have a strong institutional basis for a U.S.-Korea relationship, and this would be just a temporary blip in the relationship. I was in Korea as ambassador when Roh Moo-hyun was impeached, and I’ve been taught as an American that government goes on.