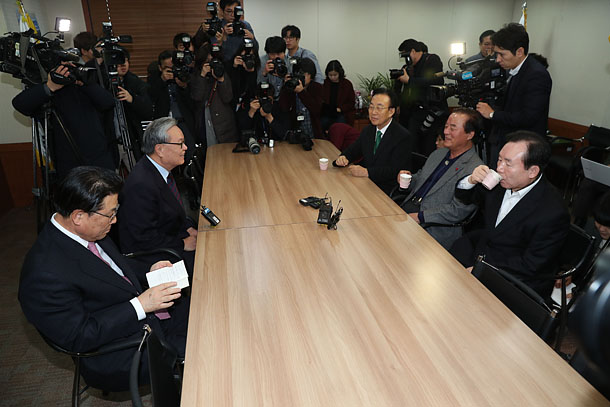 In Myung-jin, the ruling Saenuri Party interim chief, announced on Tuesday that he considers Rep. Suh Chung-won’s recent letter an “affront” to his dignity, deepening an internal strife that has caused the Saenuri to lose 30 lawmakers over the past month.

On Friday, In demanded that core Park loyalists leave the party by Friday to take responsibility for failing to prevent Choi Soon-sil from meddling in state affairs. Suh replied on Monday in a letter to all Saenuri lawmakers, claiming In’s demand was “dictatorial” and calling instead for an in-party reshuffle “in democratic order,” though he did not specify what he meant by that.

“Considering what I have gone through in my lifelong struggle for democracy,” In said, “Suh should not have taken such an attitude. He should have shown me some respect.”

In reference to Park’s impeachment, In added that if the same thing had happened in Japan, politicians there would have killed themselves.

Since In’s demand last Friday, only one pro-Park faction member, former Saenuri chief Lee Jung-hyun, has left the party, while the remaining 10 or so other core Park loyalists have stayed.

If they continue their refusal to leave the party, In could choose to forsake his title, which would further burden the governing party at a time when its approval rating has plummeted, as the president is now on the brink of being forced out of office. If it happens, it will be the first time in Korean history.

Among those under pressure to leave the party are Suh Chung-won, Rep. Choi Kyung-Hwan, who served as deputy prime minister for the economy, three-term lawmaker Yoon Sang-hyun and Rep. Hong Moon-jong.

The deepening strife between In and Park loyalists is reminiscent of the rift between Park loyalists and party members who voted to impeach the president on Dec. 9.

After their demand that Park allies withdraw from party affairs, 30 disgruntled Saenuri lawmakers left and formed their own political group, tentatively called the New Conservative Party for Reform, which will launch on Jan. 24. The mass defection left the Saenuri with 99 lawmakers, down from 129, stripping it of its status as the party with the most lawmakers.