Thae: North will only escalate from here

Thae: North will only escalate from here 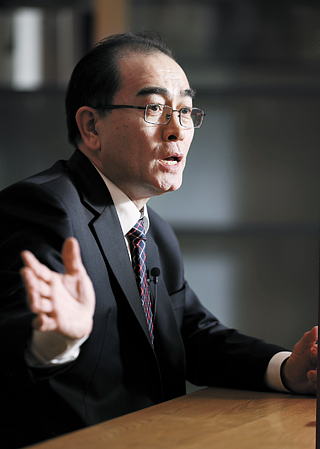 Thae Yong-ho has an interview with the JoongAng Ilbo on Dec. 30 when he visited the media group. [JEON MIN-GYU]

Thae Yong-ho, the former North Korean deputy ambassador to London who defected to the South, said North Korean leader Kim Jong-un will heighten his aggression this year in order for Pyongyang to be recognized as a nuclear state.

Thae, the most senior diplomat to ever defect to the South, was recently released from investigation under the National Intelligence Service (NIS) and sat for an interview with the JoongAng Ilbo on Friday at the newspaper’s headquarters, where he weighed in on inter-Koreans relations and how to resolve the nuclear problem.

The former diplomat fled the embassy in mid-July and arrived in South Korea in August with his wife and two sons.

After arriving in Seoul, Thae cooperated with an investigation led by the NIS and began public activities at the end of last month.

He said he feels more comfortable living in South Korea than in Europe and that he is impressed with the convenience of food deliveries. He said South Korean goods are popular back in the North, and that markets sell Chinese imitations.

He is currently using a Samsung smartphone, but pointed out when he was in London, he used an LG phone. “North Koreans deployed overseas enjoy using South Korean products,” he said. “It is probably because we are the same race.”

But because North Korean leader Kim Jong-un ordered that Samsung phones must not be used, he said his embassy had to all return Samsung phones. “But they didn’t think to ban LG Electronics,” he said, “so we all used LG phones.”

Thae began working as a researcher at the Institute for National Security Strategy, a state-backed organization affiliated with the NIS on Monday. He says he will dedicate himself to the democratization of North Korea.

He also said that should an opportunity come around, he would like to visit China and explain that, should North and South Korea become unified, it will be benefit China, as well.

Q. What do you predict for North-South relations in the new year?

A. There will be considerably heightened tension in relations between the North and South in 2017. As South Korea’s political schedule changes, the timeline calculated by Kim Jong-un will change a bit, since the [election] period is happening sooner.

Before I came to the South, [Kim Jong-un] had calculated that [North Korea] will solidify its status as a nuclear state through nuclear and missile tests over the next year, before the new [South Korean] administration takes office. North Korea will scheme to make the sanctions on Pyongyang useless during the South Korean elections.

Through endless provocations, it will heighten the sense of war crisis, to plant the idea that there is no antidote to its regime, and that giving it what it wants to calm it down would be the better option. So Kim Jong-un will conduct stronger provocations in 2017, and we will need to be more anxious.

Is there a solution to the North Korea nuclear issue?

Kim Jong-un will never give up nuclear weapons, but there is a possibility of a nuclear freeze. However, the precondition would be to recognize that North Korea and missile technology have come this far. It will say that it will no longer conduct nuclear and missile tests, but instead, what Kim Jong-un wants is for the May 24, 2010, sanctions to be lifted, the Kaesong Industrial Complex opened again and a return to the time of the June 15, 2000, Joint Declaration.

It will argue that, if this happens, the situation on the Korean Peninsula will become stabilized and will benefit South Korea, as well. North Korea, in its roadmap of North-South relations, wants the acknowledgement of its nuclear and missile program, economic support and the resumption of the June 15 Joint Declaration. But China and others will never recognize North Korea as a nuclear state. If they did, South Korea and Japan would take action and Taiwan would also attempt nuclear armament.

What is the effect of the international community’s sanctions on North Korea?

North Korea last year planned to construct Ryomyong Street in Pyongyang to coincide with the anniversary of the founding of its ruling Workers’ Party on Oct. 10, but was unable to complete it on time. This is the first time since the Kim Jong-un regime came to power that it was unable to reach its goal. While it claims the project was postponed because Pyongyang was focused on flood damage restoration, it was actually because of a shortage of supplies due to the sanctions.

What is North Korea’s response to the sanctions?

The stronger the international community’s sanctions on North Korea become, the more we need to take into consideration that North Korea’s response will evolve, as well. China restricts North Korean coal exports [in accordance with UN Security Council 2321], but there are plenty of methods to smuggle coal out.

There are cases in which vessels depart from Dandong Port in China and sail to the West Sea, turning off satellite tracking devices and entering North Korean ports to smuggle out coal. As China’s standard of living improves, a preference for seafood is increasing. That is why North Korea is working on exporting marine produce.

What I felt immediately is that it is considerably developed economically. It is far easier to live here than in Europe. You can order food and have it delivered right away, empty dishes can be left outside the door and are quietly collected. They don’t have this in Europe.

South Korean women working at restaurants and other places are very friendly. I have heard of the “Miracle on the Han River,” but I was surprised that the country could be transformed in such a short period of time. I was also shocked at the amount of food thrown away at restaurants. Because there is a shortage of food in North Korea, even a small amount of kimchi would cost money, but the large-scale waste of food in South Korea was surprising.