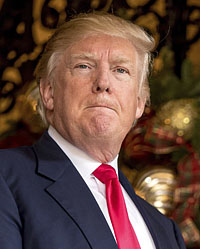 WASHINGTON - U.S. President-elect Donald J. Trump said Monday North Korea would not be able to develop a nuclear weapon capable of reaching the United States and criticized China for not doing more to help resolve the problem.

Trump tweeted the remark on Twitter after North Korean leader Kim Jong-un said in his New Year’s address that the communist nation has reached the final stage of preparations to test-fire an intercontinental ballistic missile.

It was seen as a veiled threat that it’s about to develop a nuclear missile capable of reaching the United States.

“North Korea just stated that it is in the final stages of developing a nuclear weapon capable of reaching parts of the U.S. It won’t happen!” Trump said. It was believed to be the first time Trump has made a direct mention of the North since the election. About an hour later, Trump issued another tweet criticizing China.

“China has been taking out massive amounts of money & wealth from the U.S. in totally one-sided trade, but won’t help with North Korea. Nice!” he said.

The message suggests Trump intends to increase pressure on Beijing to use more of its influence over Pyongyang as the main energy and food provider for the impoverished nation under heavy international sanctions.