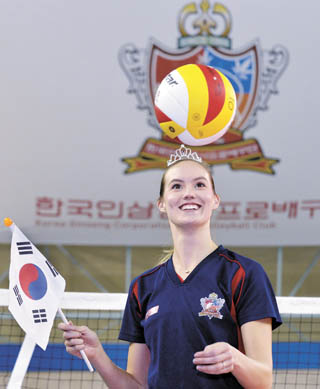 After failing in two tryouts, Daejeon KGC Korea Ginseng Corporation’s Alaina Bergsma planted her feet in Korea. “My grandfather served two years in Korea,” said Bergsma. “I heard a lot about Korea from him.” She added, “When I was competing in Miss USA, I met a number of people and enjoyed being able to go to various places.” [DAEJEON, KIM SUNG-TAE]

KGC Korea Ginseng’s women’s volleyball team in Daejeon is all smiles thanks to Alaina Bergsma, 26, of the United States.

After being bottom-ranked for three of the last four seasons, KGC has risen to fourth with 8 wins, 9 losses and 24 league points as of Wednesday, and may even catch up to Hungkuk Life Insurance, the league’s top team - and Bergsma is the source of their reversal of fortune.

She eclipses other foreign players in her offensive index, scoring 2nd at 379 points, and is 1st in attack success at 44.72 percent.

Knowing her value to the team, even when she feels under the weather, she shows up to play ball. Choi Kwang-hee, the team’s current coach, said, “These days, defeat is far away. The team has changed.”

In truth, Bergsma was unknown before joining her new team. Though she competed in overseas leagues, she did not play for top leagues - Turkey, Russia or Azerbaijan - but for lower-ranked leagues such as Portugal, Brazil, China and Indonesia. Though she tried out for the Korean league two years in a row, she did not leave a strong impression.

Before this season, KGC chose the top-ranked Samantha Middleborn, 26, but the highly anticipated player became pregnant while preparing for the season. With a surprise vacancy, and pressed for time, KGC made inquiries for Catherine Bell (Cat Bell), who played for GS Kaltex last season as a replacement player. But Cat Bell was already signed with an Italian team.

Suh Nam-won, former coach of KGC, then remembered Bergsma. “In truth, I didn’t have any big expectations,” said Suh. “I heard she tried to come to Korea twice or so.”

Bergsma agreed that, though they were half-expectant, when they saw her, the coaching staff signed in unison, “aigoo.”

Bergsma was not ready to play, but she was ready to learn and adjust.

“Foreign players train less than domestic players for the most part,” said Suh. “However, Alaina volunteered for training.”

“Before Alaina came to Korea, she played in six countries,” said Suh. “She must have learned to open her heart while traveling the world.”

But there is another reason for Bergsma’s popularity - she was chosen as Miss Oregon when she was a senior at Oregon University in 2012. That same year, she competed in the Miss USA pageant and received the photogenic prize. She has also worked as a fashion model.

“I competed in a beauty pageant at my friend’s suggestion, but it was a good experience,” said Bergsma. “The competitive aspect in beauty pageants is similar to sports. I enjoyed the change of pace after having done volleyball.”

She added, “When I first came to Korea, I came as the Alaina who competed in pageants, but my interest changed from depending on my appearance to depending my ability.”

In 2014, Alaina married Kevin Colbe, 29, a college basketball coach. “My husband is a devoted, goal-oriented person,” said Bergsma. “He is my strength. We married, but because of our work we live apart. It’s unfortunate, so we frequently video call.” Her husband and mother have visited Korea, and when they are not here her teammates keep her company.

“I chat with the coach, and my teammates take good care of me,” said Bergsma. “Although it was hard at first to be called ‘Big Sis’ [because of my age], now I’m used to it.”

Since she is fond of dogs, she goes to dog cafes when she has the opportunity as a way to forget her loneliness in Korea. But mainly, she stays focused on the sport. As she was MVP of the championships in the Philippine League in 2014-15, she also hopes to become a champion in Korea, as well.

“Our team may have received low marks, but now we’re producing good results,” she said. “It isn’t easy, but many fans are looking forward to the post-season. I think after winning game after game, I can show something more. Please cheer us on.”