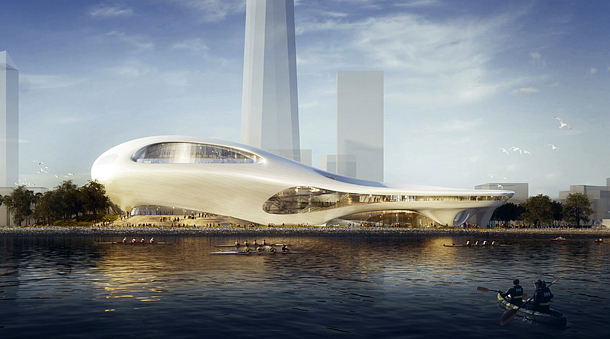 This concept design provided by the Lucas Museum of Narrative Art shows a rendering of a proposed museum on Treasure Island in San Francisco. In January George Lucas, the legendary filmmaker, is expected to decide whether he will put a museum for his extensive personal art collection in San Francisco or Los Angeles, after other attempts were foiled by community opposition. [AP/YONHAP]

SAN FRANCISCO - George Lucas is no stranger to epic struggles on the big screen, but he didn’t expect one off-camera when it came to his art collection.

For nearly a decade, the filmmaker has tried to build a museum to house an extensive personal collection that includes 40,000 paintings, illustrations and film-related items. But legal entanglements and other complications have thwarted his efforts.

After several false starts, Lucas and his art team say they will decide later this month whether to put the museum in San Francisco or Los Angeles, a strategy that has stirred a California rivalry.

The prize is big, and both cities want it badly.

“This is the largest civic gift in American history,’’ LA Mayor Eric Garcetti told The Associated Press. “I think Los Angeles is the natural home for it’’ - a notion that San Francisco officials enthusiastically contest.

The Lucas Museum of Narrative Art, as it will be called, promises hundreds of jobs and a high-profile attraction - and it’s essentially free.

The “Star Wars’’ creator is financing the project himself. He plans to spend more than $1 billion to build the museum, endow it and provide a trove of initial artworks valued at over $400 million. Together with Chinese architect Ma Yansong, Lucas has proposed a sleek, futuristic design looks like a cross between the Guggenheim and a galactic starfighter.

The museum’s bold design and concept make clear that the 72-year-old filmmaker sees it as part of his legacy, and he is increasingly impatient to break ground.

“It’s not just an enormous philanthropic gift to a city and to the world, but it is a unique museum in the way it is envisioned,’’ said Don Bacigalupi, an art historian and respected museum director Lucas hired as its founding president. “Certainly, we’ll be looking forward to the day we can move the art into a museum.’’

The museum will not, as many assume, be a repository for “Star Wars’’ memorabilia.

It will, however, show how Lucas spent some of his filmmaking fortune and that his interest in art extends beyond movies.

An avid collector for more than 40 years, Lucas is giving the museum some 10,000 paintings and illustrations that include dozens of Norman Rockwells and works from French impressionist Edgar Degas to American contemporary artist Keith Haring. There are illustrations for classic children’s books by Beatrix Potter of “Peter Rabbit’’ fame and Jean de Brunhoff, who created “Babar.’’

The museum gets its pick from some 30,000 film-related pieces, including storyboards and costumes from “The Wizard of Oz,’’ “Casablanca,’’ and, naturally, “Star Wars.’’

In 2010, Lucas first pitched his project to San Francisco and considered a site in the Presidio, but the trust that oversaw the park ultimately rebuffed him. He then took his project to Chicago, his wife’s hometown, but preservationists sued to keep it off the lakefront.

Lengthy delays prompted Lucas to abandon that bid in June and change strategy.

In October, Lucas unveiled similar but competing designs for Los Angeles and San Francisco sites, turning the project into a public competition. It seems to have worked.

Government leaders in both cities have unanimously approved it. And officials are quick to stress that this time there is no apparent opposition, and construction could begin quickly ahead of a projected 2020 finish date.

Later this month, Lucas is convening the museum’s board to decide between two distinct locations.

In San Francisco, his project would virtually have an island unto itself.

The city offered Lucas a 4-acre waterfront plot on Treasure Island, a man-made creation in the middle of the bay with cinematic views of the city skyline.

The island was built for the 1939 World’s Fair, then used as a World War II naval base. These days it’s populated mainly by seagulls, boarded-up barracks, some art studios and old warehouses, but officials hope the museum triggers its transformation. A massive $6 billion redevelopment project includes apartments, hotels and a ferry terminal.

“It’s a risk they would be taking, but it’s a bet on the future,’’ said Adam Van De Water, project manager for the museum at San Francisco City Hall. “We think his heart is here in the Bay Area.’’

Lucas has spent most of his life in the San Francisco area, and Lucasfilm was based in the city before he sold it in 2012 to Disney Co.

“Put yourself in his shoes. You could be on Treasure Island, where you’re visible throughout downtown San Francisco,’’ said Van De Water, pausing to take a swipe at Los Angeles. “Or you could be a museum in a park with other museums.’’

Los Angeles has offered Lucas a 7-acre spot in Exposition Park, a sprawling cultural compound that holds three other museums and the Coliseum, home to the LA Rams.

It has its own light rail station and is near the main campus of the University of Southern California, where Lucas went to film school. AP