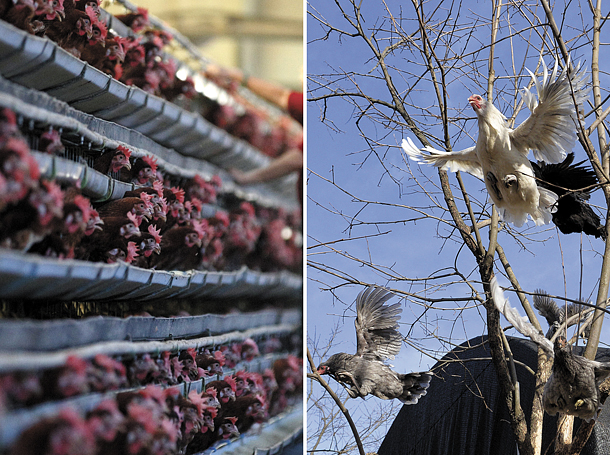 Industrial-scale farming of egg-laying hens, left, is under fire for being the main cause of the worst outbreak of avian influenza in Korea’s history. Analysts point out the quarantine process should be changed fundamentally to give more space to hens, right, to prevent a similar crisis in the future. [GONG JEONG-SIK, KIM SEONG-TAE]

Korea is going through the worst outbreak of avian influenza in history. Less than 50 days after the first case of the highly pathogenic H5N6 virus strain was reported, 30.33 million birds have been culled nationwide, with chickens accounting for over 85 percent.

The carnage is three times as bad as in the first seven months of 2014, the worst outbreak until now, when 13.96 million birds were destroyed. Egg prices have soared and the financial damage is estimated at almost 1 trillion won ($829 million), according to Rep. Jeong In-hwa of the People’s Party. Losses at farms are estimated at 334.2 billion won, for meat dealers and processing firms at 370.9 billion won and the compensation the government has to pay to farmers losing birds is already 237.4 billion won.

Korea has more than a decade-old history of bird flu breaking out almost every two years. The government has yet to offer clear-cut reason for the ever-worsening situation, casting the blame on migratory birds - although the situation is a lot more complicated than that.

The Ministry of Agriculture, Food and Rural Affairs belatedly formed a task force last month amid escalating complaints from farmers over the poor handling of the situation. It made a six-day trip last week to Japan, which is also suffering an outbreak but is known to be better at coping.

It was looking for solutions, although they’re unlikely to help with the current outbreak, according to an official from the quarantine department at the ministry.

A joint committee for measures against slaughter over avian influenza, which consists of some 30 animal rights activist groups, environmental organizations and the opposition Labor Party, recently issued a statement saying Korea’s industrial-scale farming of egg-laying hens has to be changed. It almost guarantees bird flu outbreaks, it said.

“Hens spend their entire lives in a cage the size of a sheet of A4 paper with enormous dust, ammonia gas and stink that is piled up to 20 stories,” said Lim Young-ki, secretary general of the Coexistence of Animal Rights on Earth, a member of the committee. “It would be strange if the virus does not spread in such a filthy environment. An upgrade in our farming systems that provides a healthy environment for poultry breeding is urgently needed.”

The cages used for egg-laying hens, once thought of as a shining example of industrial modernization, have turned into an invitation to disaster, the groups say. The battery cages - rows and columns of identical cages connected together like battery cells - house millions of birds in one place. Of the 25.82 million chickens culled as of Wednesday, 87 percent were egg-haying hens.

The European Union Council was quick to ban conventional battery cages from January 2012 for animal welfare reasons. The number of eggs produced in battery cage-facilities in the EU has been rapidly decreasing. The measure was proposed after international scientists observed signs of extremely abnormal behavior in caged hens.

“As long as the current system that allows mass breeding of egg-laying hens is maintained, no quarantine measure will work,” said Park Choi-kyu, a professor of veterinary science at Kyungpook National University. “The government is advised to impose a limit on the number of poultry on each farm according to their own quarantine capacity.”

Large operators don’t want to change because raising poultry in open space is far more costly. It will lead to higher-priced eggs.

Animal rights activists also take issue with the quarantine process used now. When a case of avian flu is reported at a farm, quarantine officials from the Ministry of Agriculture, Food and Rural Affairs and local governments are dispatched to spray disinfectants, throw the birds into gunny sacks and bury them under ground. Many of the birds have been buried alive - painful and traumatic for both the animals and the humans forced to do it.

The government claims the mass culling is the fastest and most efficient method to curb spread of the virus and says it is adopted by “other advanced economies.”

But the joint committee for measures against slaughter over avian influenza claims the burying alive of birds is illegal under the Animal Protection Act, the Livestock Epidemic Prevention Act and guidelines for avian flu quarantine measures, which stipulate that birds be euthanized through the use of carbon dioxide gas or a fatal head injury and be buried or incinerated.

“Burying animals alive not only goes against animal welfare but also contributes to an even speedier spread of the virus as the process involves saliva, blood, feather and dust,” the committee said in a statement, “effectively neutering the ongoing quarantine procedure.”