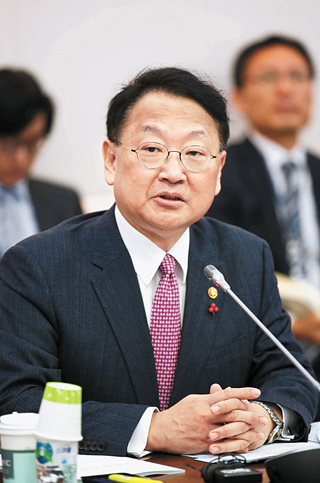 Korea’s finance minister said Wednesday that the government will make an all-out effort to front-load its budget spending in the first quarter to pre-emptively cope with rising economic uncertainties at home and abroad.

“Facing strong headwinds inside and outside the country, the Korean economy will likely lose recovery momentum,” Finance Minister Yoo Il-ho said in a meeting on fiscal spending in Seoul.

“The government will beef up fiscal intervention as a trigger for economic reinvigoration and a stepping stone for further development.”

Yoo, Korea’s top economic policymaker, has repeated such comments on a stronger fiscal role in propping up the economy as Asia’s fourth-largest economy saw its growth slow in the second half of 2016, with it expanding 2.6 percent on-year in the third quarter and 1.9 percent in the fourth quarter.

The global economic downturn and U.S.-led uncertainties, such as rate increases and a government change, will deal a blow to the export-oriented economy this year, while political scandals involving President Park Guen-hye also weighed heavily on the Korean economy.

The Seoul government forecast that the country will grow 2.6 percent in 2017, down 0.4 percentage point from its earlier growth prediction of 3 percent.

In order to stop the downside cycle, the government will pour more than 30 percent of the 400.5 trillion-won ($334.4 billion) budget earmarked for 2017 in the first three months of the year.

The finance minister asked the government ministry and agencies to execute the front-loaded budget as scheduled.

“There are some 7,000 projects worth 400 trillion won this year,” said Yoo. “Each minister should do its best to carry out the projects in order to help the economy get on the recovering track.”

In a separate ministerial-level meeting, the government said the finance minister will visit New York on Jan. 9 to brief foreign investors on the Korean economy and reform measures as part of efforts to boost investment from the United States.

“In New York, I will share views on the economic situation with foreign investors and media and explain our major policy plans with them,” Yoo said.

It is the second time since his inauguration that the Korean government has held an investor relations event in the U.S. The first took place in April last year.

At the same time, officials of the foreign ministry will meet with their U.S. counterparts in Washington D.C. as part of efforts to build an economic relationship with the incoming Donald Trump administration.

Also, Seoul and Washington will have talks on the bilateral free trade agreement in Seoul on Jan. 12 to fine-tune pending trade issues between the two nations.

“We’re trying to stress the importance of Korea-U.S. trade partnership and ask the incumbent and incoming U.S. governments to remain consistent with their trade policies,” said Yoo.

Vaccine diplomacy will help everyone