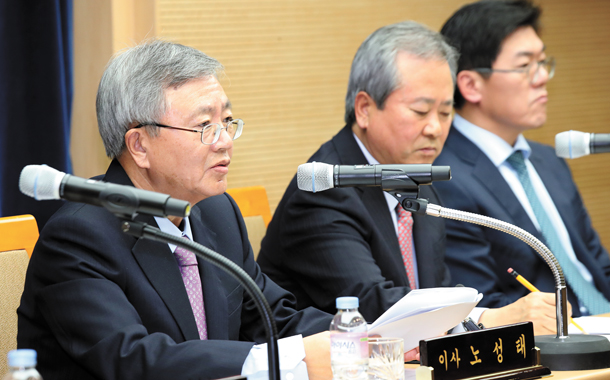 Ro Sung-tae, head of Woori Bank’s board of directors, left, and other outside directors, including former Shinhan Financial Group CEO Shin Sang-hoon, middle, at a press briefing in the bank’s headquarters in central Seoul on Wednesday. [YONHAP]

Two of the country’s biggest banks, Woori and Shinhan, are taking first steps toward changing their top management.

Woori Bank will choose its next chief executive officer from within its own organization, the board of directors said Wednesday. The current CEO, Lee Kwang-goo, will step down in March, and the new chief’s term will begin on March 24, when the bank holds its shareholders meeting.

Last year, the government sold its 29.7 percent stake in Woori Bank after four previous attempts to privatize the bank.

“We have established a committee made up of outside directors that will recommend the next CEO,” said Ro Sung-tae, head of the bank’s board of directors.

The recommending committee will be led by Chang Dong-woo, the investment chief at IMM Private Equity and Woori Bank’s outside director. The board of directors has set a deadline of Wednesday for candidates’ applications.

Ro said the new CEO will be chosen among top executives including former and current vice presidents and heads of subsidiaries that have served the bank in the last five years.

“[The reason behind choosing Woori executives as candidates] is to enhance independent management after the bank is privatized,” Ro said. “They will help stabilize the organization while maximizing the value of the bank. In recent years, the bank’s profitability has improved, and it is difficult to say that the bank is in a state of emergency. Therefore, we don’t see the need to accept candidates outside the bank.”

Shinhan Financial Group is taking its own steps toward selecting a new chairman after Han Dong-woo’s term ends in March.

“The recommending committee members are currently looking at candidates and are expected to narrow the list to three or four people during their first meeting next week,” a Shinhan Financial Group official said. In the next two months, the committee is expected to meet three or four times, with the last being a final interview of the candidates.

According to industry sources, there are roughly seven candidates in consideration, including five current heads of subsidiaries. The two with the highest potential are Shinhan Bank CEO Cho Yong-byoung and Shinhan Card CEO Wi Sung-ho.

Both have been recognized for improving their respective subsidiary’s performance and putting Shinhan in the lead in both industries. Wi was consequently granted another term at the credit card company last August, the second time his tenure was extended since he became CEO of Shinhan Card in 2013.

The current competition for the chairmanship is the second time that Cho and Wi have competed for a position within Shinhan Financial Group. The last time was in 2015, when the two competed for the Shinhan Bank post, which Cho eventually won.