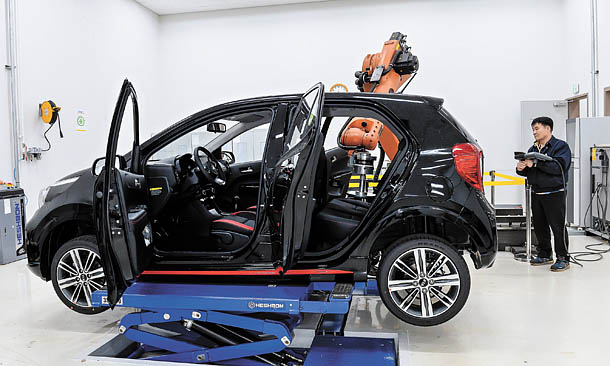 “We consider car seats a science,” said Kwak Min-hyuk, a researcher at the lab. “It is our job to make the seat suit diverse body shapes. We test out the seats’ strength from the very beginning stages to solve it.”

Kia Motors, an affiliate under Hyundai Motor Group, has unveiled the newly upgraded compact vehicle Morning, the model’s first full overhaul in six years. The Korean automaker is hoping to reclaim the No. 1 spot it ceded to GM Korea’s Spark through amped-up safety features and new smart technologies.

“The all-new Morning will change the paradigm in Korea’s compact car market because it aims to bring premium quality that exceeds the existing concept of compact cars,” said Jung Rak, vice president at Hyundai Motor Group.

The company says it has strengthened the steel in the new Morning and enhanced the overall bodywork. The vehicle is the first of its kind with a vehicle stability management system that will prevent the car from leaning sideways when making quick turns and keep the vehicle straight even when it stops abruptly.

Kia has also stepped up safety features for passengers riding in the back of the car. It has installed a seat belt pretensioner that fastens the belt tightly when the car begins driving. No other compact vehicles have installed such safety measures in the back seat before.

As a plus, the automaker has upgraded the smartphone technologies applied on the all-new Morning. The compact vehicle has what the company calls the Kia T Map, a navigation system developed by SK Telecom, on its dashboard. T Map is currently the most popular navigation program that drivers use.

The car will also come with Apple Carplay, which allows iPhone-using drivers to synchronize their phones with the vehicle to play their favorite music, text their friends and perform other tasks hands-free while driving.

Another change in the Morning is the more spacious interior. The company said it has expanded the space both on the driver’s seat and back seats by expanding the wheel base to the maximum level.

Compared to the previous model, the new Morning’s wheel base is 15 millimeters larger at 2.4 meters (7.9 feet). The car’s length and width are 3.5 meters and 1.59 meters, about the same as the rival Spark. In terms of height, the Morning is a bit taller than the Spark, 1.48 meters versus the Spark’s 1.47 meters.

The Morning’s back seat can be folded completely for more luggage room. When completely folded, the car can handle load of up to 1,010 liters (36 cubic feet).

The car will run on the newly developed engine, the Kappa 1.0 Eco Prime. The fuel efficiency is 15.4 kilometers per liter (36 miles per gallon), the same as the Spark.

Despite such diverse upgrades, the Morning’s price will remain competitive. Its main trim, Luxury, which comes with a smart key function and auto light system as basic options, starts at 13 million won ($10,830).

Seo Bo-won, a marketing director at Kia Motors, said the price of its Luxury trim has been set at least 300,000 won less than the Spark’s counterpart trim, the LT+. “However, considering the basic embedded options, residual value in the secondhand car market and gas bill, the Morning’s price is 2.15 million won cheaper than the Spark in total,” Seo said.

The Morning was once the No. 1 selling compact car between 2008 and 2015. But Kia gave up its market share crown last year to GM Korea. With the new Morning, Kia hopes to reclaim the No. 1 spot. Reservations for the car began Wednesday, and it will officially go sale on Jan. 17.