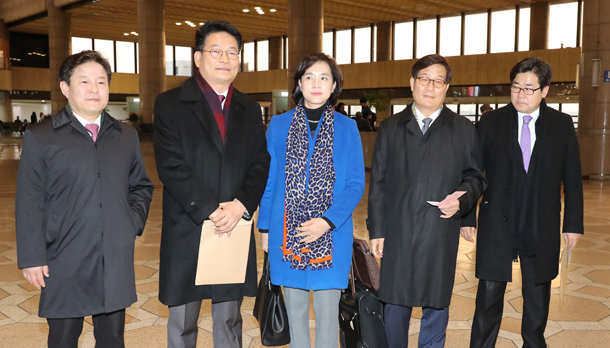 A group of lawmakers from the main opposition Minjoo Party of Korea pose for a photo before their departure for China at Gimpo International Airport in western Seoul on Wednesday. [YONHAP]

A group of seven Korean opposition lawmakers on Wednesday embarked on a three-day trip to Beijing to discuss diplomatic tension between the two countries over Seoul’s plan to deploy a U.S. missile shield.

The delegation from the main opposition Minjoo Party of Korea is expected to voice concerns over a set of recent steps China has taken against South Korean businesses and entertainers in apparent retaliation.

Seoul planned to install a Terminal High-Altitude Area Defense (Thaad) system in its southern county of Seongju this year, which Beijing claims could hurt its security interests.

On the first day of the visit, the lawmakers including former Incheon Mayor Song Young-gil were set to meet with Chinese Foreign Minister Wang Yi and attend a dinner hosted by his ministry.

Today, they plan to meet with experts and officials from China’s Communist Party. On Friday, they plan to hold separate meetings with Korean Ambassador to China Kim Jang-soo, members of the Foreign Affairs Committee under China’s National People’s Congress, and Korean correspondents in Beijing.

Conservatives have called on them to cancel the visit, arguing Beijing could exploit the occasion for its aggressive campaign to derail the Thaad deployment. They said Korea must not allow a foreign government to influence its sovereign decision on national defense. On Tuesday, China’s Foreign Ministry spokesman Geng Shuang welcomed their visit, while reiterating China’s opposition to the deployment.

“The reason China is meeting lawmakers from the Minjoo Party is to have Korea withdraw the plan to deploy the Thaad battery, especially as it counts presidential hopeful Moon Jae-in as a member,” Rep. Jeong Yong-ki, Saenuri’s spokesman said.

“(The Minjoo Party) should not insult the Korean people by engaging in a form of humiliating diplomacy,” Jeong added. The Saenuri said Moon should come up with alternative options to Thaad, other than just criticizing the deployment. The new party also said the Thaad battery is intended to protect South Korea from North Korea’s nuke provocations, and claimed that security is not an issue that should be bargained between two countries. YONHAP