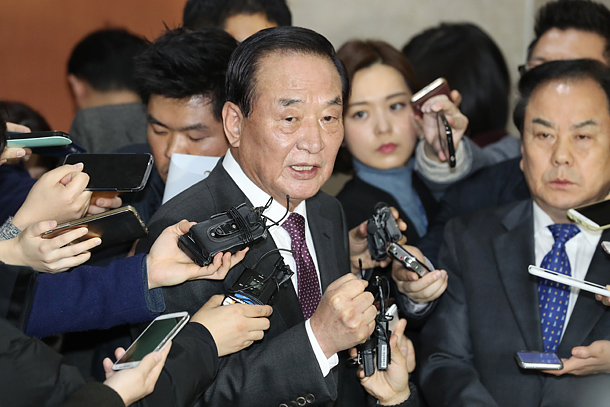 Rep. Suh Chung-won, a leader of the President Park Geun-hye loyalists, speaks to reporters in the press room of the National Assembly on Wednesday. He demanded party interim chief, In Myung-jin, leave the party. [JEON MIN-GYU]

Saenuri Party lawmaker Suh Chung-won demanded Wednesday that party interim chief, In Myung-jin, leave the party after In demanded that Suh and his fellow Park loyalists do likewise.

Suh, who is known as the “big brother of the pro-Park group,” called In a “lying pastor” who was “illegally” sabotaging the party. Suh also likened In’s demand that pro-Park members leave the party to the execution of Jang Song-thaek by his nephew Kim Jong-un, the North Korean leader.

“It is interim leader In, who is illegally destroying Saenuri without any due process, who therefore must leave the party,” Suh said during a hastily arranged press briefing.

The open confrontation between the two old friends stems from In’s ultimatum last Friday that those with close ties to the impeached president leave the party to take responsibility for the Choi scandal. In warned he would forsake his title as head of the party’s emergency council unless his demand was met by Friday.

Castigating In for his demand, the veteran lawmaker said In had promised him he would not seek to purge Park loyalists, and described In’s leadership as that of a tyrant.

While Suh made clear his opposition to In’s demand, he failed to persuade other party members to rally behind him at a time when the party’s approval rating has plummeted. Concerning Suh’s reaction Wednesday, the Saenuri floor leader, Chung Woo-taik, said it was hard for him to understand why Suh had spoken such harsh words against In when the party leadership members already vowed that they would take whatever punishment from In’s emergency council for having failed to prevent the Choi scandal. In line with In’s demand, Jeong Kab-yoon, a Saenuri pro-Park member, submitted his defection notice Wednesday, becoming the second Park loyalist to defect after former Saenuri chief, Lee Jung-hyun, who submitted his defection notice Monday.