Koo and the gang aim for World Cup glory

Koo and the gang aim for World Cup glory 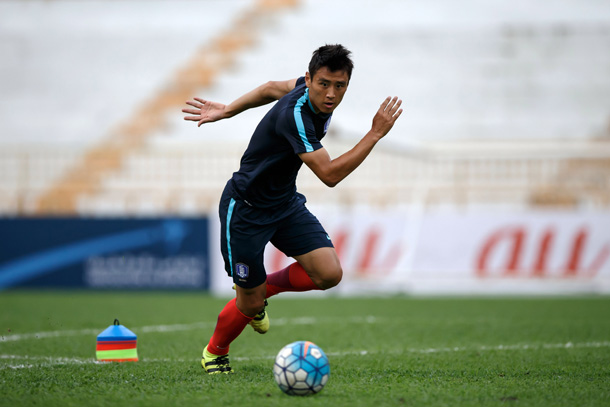 After becoming a father of two, Koo Ja-cheol was instilled with a drive to do his best as a father and for South Korea’s ninth qualification for the World Cup. [JOONGANG PHOTO]

Korean football faces a challenge in 2017, as the national football team aims to cement its World Cup qualification in March.

“I am determined to qualify for the World Cup,” said Koo Ja-cheol, 28, midfielder for the Korean national football team and Bundesliga club FC Augsburg. “Whenever it’s tough, I recall my father’s words.”

His father, Koo Gwang-hoe, 57, would often say, “An athlete of the national team has to devote his all to the country.”

Due to his poor performance, Uli Stielike, coach of the team, did a reshuffle and gave Koo the task of leading the national team to the 2018 World Cup in Russia.

In Game Five of the World Cup qualifiers on Nov. 16, Koo made a tiebreaker in the last forty minutes of the match, running over 11 kilometers (6.8 miles) while enduring calf pain. The national team captain, Ki Sung-yueng, 28, midfielder for Swansea City, also pressed on after taking painkillers for his broken toe.

“If you badmouth our players, you’re a bad person,” said Cha Duri, an analyst for the South Korean national team. “To withstand 90 minutes of such pain…”

The national football team is standing at the crossroads of their ninth qualification for the World Cup. With the results of the initial five matches in the Group A final qualifiers - 3 wins, 1 draw, 1 defeat for a total of 10 points - Korea is ranked second, one point behind Iran.

To secure a ticket to the World Cup finals, Korea must land 4 wins and 1 loss or 3 wins and 2 draws in its remaining five matches.

“The sixth match with China and the seventh with Syria could send us straight to the World Cup,” Koo said. “By winning both matches, the burden of the final match with Uzbekistan will be reduced.”

After having a son in 2014 and a daughter last October, Koo said, “My sense of responsibility to my family increased. I have to work harder in order to earn my children’s milk money. I will play for my family and for the sake of the people who support the national team.”