‘Little Messi’ has his game plan in order

‘Little Messi’ has his game plan in order 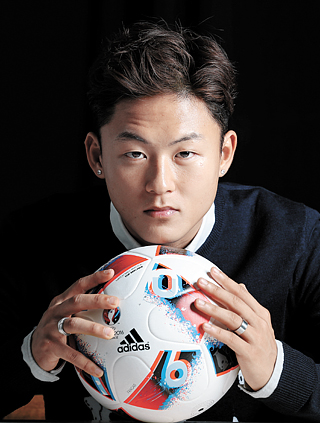 Lee Seung-woo’s role model is the similarly-built Lionel Messi. Like Messi, Lee gives his all for the team. [JEON MIN-KYU]

Lee Seung-woo, 19, midfielder and forward for FC Barcelona, was nicknamed “Little Messi” after netting an explosive goal in the Asian Football Confederation U-16 Championship against Japan in 2014. After taking the ball 60 meters (197 feet), past three defenders, Lee scored a goal. From then on, he was seen as a young star, catching the attention of the world.

The International Federation of Association Football (FIFA) U-20 World Cup will begin in Korea on May 20. The event will be held in Suwon, Incheon, Cheonan, Daejeon, Jeonju and Jeju. Stars such as Luis Figo of Portugal, Thierry Henry of France and Lionel Messi of Argentina have already made names for themselves in this tournament. Shin Tae-yong, coach of the Korean national team for U-23, is challenging the championship.

On Dec. 27, Lee returned to Korea to participate in the Hong Myung-bo charity football match and was interviewed by a reporter from JoongAng Ilbo, an affiliate of Korea JoongAng Daily. “I’m well aware of the high expectations of me,” said Lee. “I don’t feel any pressure. I’m merely debating how to show off even more.” Currently in FC Barcelona’s highest level in youth football, Juvenil A, Lee is aiming to advance into the adult FC Barcelona B (reserve team).

Q. When do you think you will advance to the Barcelona B team?

A. Our team is going parallel with the Premier League (Youth) and the Youth Champion’s League. There’s also the Spanish Copa del Roy. There were four to five opportunities when I could have gone to the B team. I discussed this with the coach, and it was decided I would remain in Juvenil for now. Rather than playing for only 30-40 minutes in a match on the B team, I think playing full-time in this team is better. I will definitely move up to the B team after 6 months.

How about endeavoring to play on a different team on the adult level?

If I went to a different team, I would have been more than sufficient to play in the first division. I’ve heard this suggestion before. However, playing on the world’s best team, FC Barcelona, was my dream. That was what I thought, to become the best player in the world. I’m happy with Barcelona, and at this time, I’m constantly starting in games.

In an interview, you once said Messi was “god-like.” Do you feel you have come any closer to his level?

Messi is an indomitable wall. In a football game, the plays that can come out in a professional match, he makes them look easy. I can only wait for him to get older.

What did you feel was different about Barcelona?

Barcelona’s DNA is, in short, “possession-game football.” No matter the opponent, to retain possession, the brain, technique and decision-making are important. If [the team] preferred players with a great build, I would have been expelled from Barcelona already. I got up here through quick decision-making.

You’re 170 centimeters [5 foot 6 inches], do you ever wish you were slightly taller?

When there are pants that I like but the length is too long? But when playing football, no. Even now, I’m growing a little taller.

What do you think is the biggest misunderstanding surrounding you?

I heard there was a lot of talk of me being selfish in the field and I couldn’t understand how people who didn’t even know me could say such things. Because in Korea, I was more concerned with assists than goals. Then there’s talk of my goal-making being insufficient. Although it’s difficult, I’m making an effort to not concern myself with it.

Does Coach Shin have an aggressive style?

I haven’t experienced working with the coach yet, but the players that trained together with the coach in Jeju last December say, “He’ll be a good fit with you, so don’t worry.”

The club says they check up on domestic media. Is that right?

By nature, the media’s attention is concentrated [on me]. These days, more so than from Korea, there are more articles from Spain. It’s to the point there’s even an article introducing our dog.