Cho Seong-jin captivates at recital : The sweeping sounds of Chopin’s 24 Preludes were highlight of night

Cho Seong-jin captivates at recital : The sweeping sounds of Chopin’s 24 Preludes were highlight of night 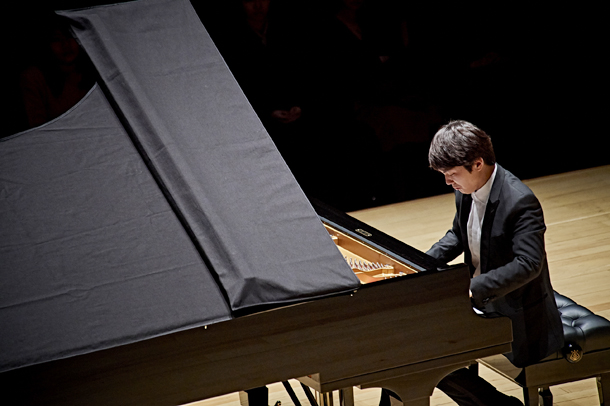 Korean star pianist Cho Seong-jin performs during he first day of his two-day recital at the Lotte Concert Hall on Jan. 3. [LOTTE FOUNDATION FOR ARTS]

It’s easy to assume that Korean star pianist Cho Seong-jin’s performance at the Chopin Piano Competition in October 2015 was the best he could do with Chopin’s multifarious Preludes since he’s became the first Korean winner of the prestigious piano competition.

But that would be a rash judgement.

On Wednesday evening, during the second day of his first solo performance since the competition, the 23-year-old pianist proved there was still room left for him to develop. He’s had few performances since his big win - his homecoming gala last February and an accompanied performance with the Seoul Philharmonic Orchestra in July - but this two-day recital at the Lotte Concert Hall on Jan. 3 and 4 was the first performance featuring solely him and his piano on stage since he became a star.

His second show had the same program as the first, except for the Chopin piece played in the second part of the show, after the intermission. On the first day, he played Chopin’s Ballade No.s 1 to 4. The next day, he played the 24 Preludes.

Inside the country’s first vineyard-style classical music venue, Cho started off with two very heavy pieces: A renowned 20th century composer Alban Berg’s “Piano Sonata in B minor Op. 1,” followed by Franz Schubert’s “Piano Sonata No. 19 in C minor D. 958.” The dramatic emotions he showed for the two pieces caused the audience to hold its breath in tension. Cho showed off his own unique style, sweeping the whole space with his energetic play.

Despite playing solo, the stage sounded full and dynamic, with each key resonating just the right amount inside the superior acoustics of the Lotte Concert Hall. The venue really gave a hand to the flawless concert, since Lotte Concert Hall also offers a 30-minute intermission - 10 minutes longer than many other venues. The ample rest helped audience members better concentrate on the highly anticipated second part of the performance - the true reason that many fought for the tickets that sold out in just nine minutes.

“I heard that the pianist I admire, Alfred Cortot (1877-1962), was the first pianist who played and recorded the whole 24 Preludes at once,” said Cho during an interview with the Lotte Cultural Foundation prior to the recital. “I may be wrong, but my interpretation is that it should be played all at once as a one whole piece. So I try to play all 24 numbers at the same time in one breath, but with changing characteristics and colors for diversity.”

Cho’s Chopin Preludes was indeed colorful. He played it as if all 24 numbers have a link connecting one number to the next. Cho says that’s how it was written in the first place. For example, No. 3 that’s in G major ends with a C note that sounds very crystal clear and light. No. 4 follows and starts with the same C note, but sounds very heavy as it’s a “tragic prelude,” Cho said. Why was it so distinctive and dramatic in Cho’s performance? That seems to be his key talent.

After giving two encores - Chopin’s “Marzurka” and Brahms’ “Hungarian Dance No. 1” - Cho headed out to meet with his fans who were patiently waiting in line to get his autograph. According to the Lotte Foundation for Arts, Cho’s two-day recital broke the venue’s ticket sales records.

Those who managed to get tickets within the nine minutes they were available were the real winners of the lottery.