Still an intermediary in fashion?

Still an intermediary in fashion? 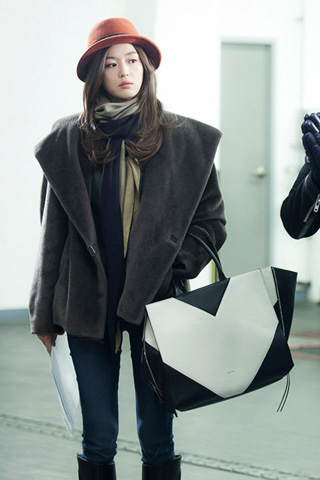 Lately, the fashion industry is once again experiencing the “Jun Ji-hyun effect.” Everything she wears on the television drama “The Legend of the Blue Sea” became the hottest trend, and the outfits and lipstick she wore sold out. An insider of a fashion brand that sponsored her outfits said, “The economy is sluggish in the aftermath of the impeachment crisis, but we are getting many inquiries, just not as many as for the ‘My Love from the Star’ three years ago.”

Back then, “My Love from the Star” was even discussed in the Blue House. Right after the series ended, Park Geun-hye mentioned “Cheon Song-yi coat” at the meeting on regulatory reform on March 20, 2014. “Chinese viewers logged onto Korean shopping malls to buy the outfits and accessories that the actress wore in the show, but they could not make the purchase because of the public key certificate demanded in Korea,” she said. Lee Seung-cheol, vice president of the Federation of Korean Industries, added, “Because of ActiveX, Chinese fans could not buy the coat.” The coat that Cheon Song-yi, played by Jun Ji-hyun, wore in the show became the symbol of unnecessary regulation.

Foreign customers increasingly want to make purchases directly from Korean online shopping malls. The government is eager to secure the market as interests in fashion and cosmetics that Korean celebrities use are growing among foreigners.

Then, if the technical obstacles are cleared, will Korean fashion sell like hotcakes and boost the Korean economy? Here, we are missing something. We must have attractive fashion to sell. Let’s go back to “My Love from the Star.” What Jun wore in the series was made by DKNY, Paul Smith, Celine and Burberry. They are global luxury brands that have branches and sales networks around the world.

When an item becomes popular on a Korean drama, it is marketed and sold in the global market. In fact, DKNY’s China branch thanked their Korean counterpart for selling out of the coat. For the Legend of the Blue Sea, Jeon models Dolce and Gabbana, Miu, Sacai and Manolo Blahnik. Only a few Korean brands were featured — Suecomma Bonnie, Misha and Nepa — for which Jun is a model.

Fashion companies are struggling for reasons. The economy is slow, and global brands are expanding fiercely. Korean consumers are becoming more selective. Advancing to foreign markets is also not easy due to cultural differences. As much as technology, fashion needs innovation. Even when it becomes easier for foreigners to shop on Korean sites, it will be useless without attractive fashion. Korea should not remain an intermediary in fashion.


*The author is a deputy editor for lifestyle news of the JoongAng Ilbo.