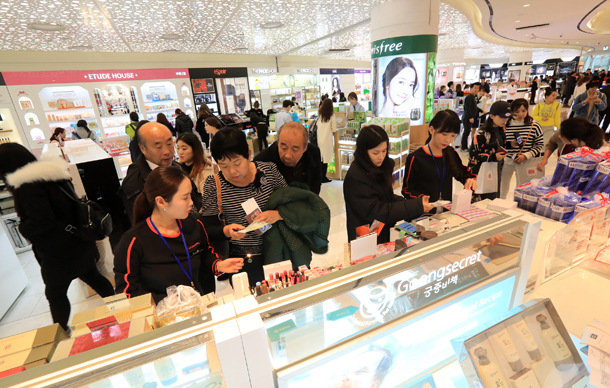 Chinese tourists shop for cosmetics at Lotte’s duty-free store at its World Tower branch in Jamsil, southeastern Seoul, on Thursday. The Korean government reissued the retailer a five-year duty-free licence after stripping it last year. [YONHAP]

The 27-year-old branch was suspended in June for failing to renew its duty-free license.

The nation’s top duty-free operator said that the Korea Customs Service granted it a final operating license to reopen Thursday, which Lotte put to use right away.

Among the three operators that obtained licenses last month, Lotte was the first to open its doors to customers. The other two winners - Shinsegae and Hyundai Department Store - said their stores won’t open until the end of the year.

Some 350 brands, most of which are cosmetics and fashion, opened Thursday at the World Tower branch.

Hermes, one of the “top three luxury brands,” was open and the other two - Chanel and Louis Vuitton - are scheduled to open this month after construction is complete.

The World Tower branch houses 500 brands under its roof, but plans to build to 700 within the year.

The duty-free shop operator expects to generate 1.2 trillion won ($1.01 billion) this year from the World Tower branch. During the first half of last year before it lost its license, World Tower branch earned some 380 billion won.

Some 8,000 Chinese tourists already were scheduled to visit on Thursday. Considering additional visitors who flocked to Jamsil after hearing of the reopening, a Lotte spokesperson said the retailer expected at least 10,000 visitors on opening day.

“In order to have a stable operation, some 1,000 staff members have been already dispatched to their places, Jang Sun-wook, chief executive officer of Lotte Duty Free, said in a statement.

“Partnering up with nearby cultural resources, we are planning on establishing one-stop shopping and tourism infrastructure here,” he added.

Lotte Duty Free’s World Tower branch vies to become a landmark in Seoul once the World Tower opens in April as the tallest building in Korea. Once combined with space reserved inside the tower, Lotte Duty Free will become the largest duty-free shop in Korea, going from the current 120,000 square meters to 173,340 square meters. The renewed license gives Lotte the right to operate the duty-free business for five years.