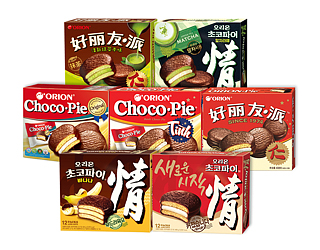 The company sold 2.3 billion pies, enough to wrap around the Earth three-and-a-half times.

Korea, the home turf of Orion, maker of the Choco Pie, saw the largest increase in sales. The popularity of the Choco Pie Banana and Choco Pie Matcha Latte, both released last year, contributed to the 37 percent growth, as their success pulled up Choco Pie’s brand value and refueled sales for the original version as well.

The most prominent lift in global sales came from Vietnam, which posted a 37 percent growth year on year. The company’s decision to enlarge Choco Pie sizes from 30 to 33 grams (1.2 ounces) per piece without a price increase last year received favorable responses from Vietnamese consumers, a strategy that was applied in Korea and Vietnam only.

“In summer, we also promoted a recipe to freeze Choco Pie as a seasonal event and received positive response from locals that live in the tropical climate,” said a company spokesman.

In China, Choco Pie sales rose 17 percent, surpassing 200 billion won for the first time. China is the first foreign market for Orion, which it entered in 1997. Chinese locals were already aware of the snack from word-of-mouth and their trips to Korea. Sold under the name Hao Li You Pai, meaning “good friend pie” in Chinese, Choco Pie set a record last year when its green tea spin-off raised 40 billion won during the first four months of release.

Revenue from Russia increased 13 percent year on year, despite the country’s stagnant economy. In Russia, Choco Pie is a premium snack often enjoyed with tea. In 2011, an official photo of President Medvedev drinking tea with a box of Choco Pie on the table became an online sensation in Korea.

Orion first introduced the small, chocolate-covered cake to Korea in 1974, spurring many spin-offs from confectionery competitors. For its 60th anniversary last year, the company released different flavors of Choco Pie for the first time. Orion began exporting Choco Pie Banana and Matcha Latte during the second half. Choco Pie is exported to more than 60 countries.