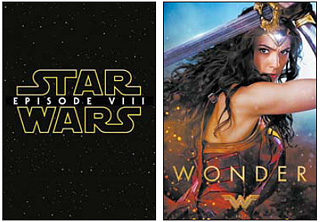 Superhero and science fiction fans have a lot to look forward to in 2017, as a number of superhero movies featuring popular characters are scheduled to hit theaters, alongside the return of several much-loved sci-fi franchises.

Created 76 years ago, Wonder Woman will finally get her first movie. Directed by Patty Jenkins, who previously helmed the pilot episode of the AMC drama “The Killing” (2011), and starring Gal Gadot as Wonder Woman, it remains to be seen whether DC Comics will be able to revive its reputation after several failures, including last year’s “Suicide Squad.” Other superhero films on the list are Marvel Studios’ “Guardians of the Galaxy Vol. 2,” starring Chris Pratt, and “Spider-Man: Homecoming,” featuring Tom Holland. Hugh Jackman, who has played Wolverine for almost two decades, will yet again play the character in 20th Century Fox’s “Logan.” The film’s plot draws from Marvel’s Old Man Logan comic.

For those more into sci-fi heroes, “Star Wars: Episode VIII,” starring Daisy Ridley and John Boyega, is to be released in December. It will be the last Star Wars film featuring the late Carrie Fisher, who passed away after suffering from heart attack late last month.

“Transformers: The Last Knight,” which involves a time-traveling plot, will be another choice on the big screen in 2017. It will be the first Transformers film since 2014’s “Transformers: Age of Extinction.”

Disney’s campaign to turn each of their animated classics into live-action movies will continue with their 1991 hit “Beauty and the Beast.” With Emma Watson at the forefront, the adapted film refashions and modernizes the classic characters to match the tastes of contemporary audiences.

Illumination-Universal’s “Despicable Me 3” will be one of the most anticipated animation choices for lovers of its heartwarming humor this year. Featuring a supervillain and cute yellow minions, the series that had humble beginnings has grown into an impressively adaptable franchise.