The most anticipated films of 2017 : The upcoming year is filled with political thrillers and exciting adventures

The most anticipated films of 2017 : The upcoming year is filled with political thrillers and exciting adventures 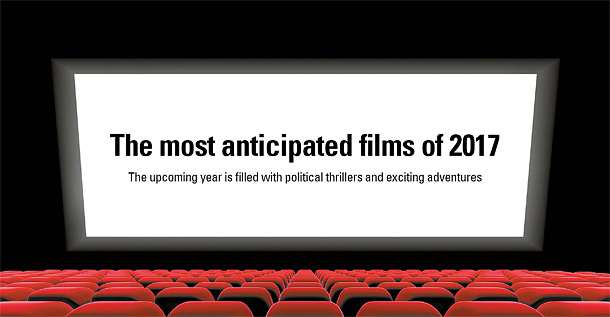 A new year usually fills moviegoers with anticipation and excitement. This year will be a particularly appealing one for film fans, as a number of big name directors such as Bong Joon-ho and high profile actors, including So Ji-sub and Song Joong-ki, are slated to return to the big screen for the first time in several years.

Some of the most awaited films in 2017 are still in production and still have working titles, including “Special Citizen”, which is about an ambitious Seoul mayor, and “Single Rider,” which questions what true happiness is. Among the Korea JoongAng Daily’s picks are “V.I.P.,” “Okja,” “With God,” “Taxi Driver” and “Battleship Island.”

Directed by Park Hoon-jung of “I Saw the Devil” (2010), the upcoming political thriller “V.I.P.” is a star-studded film that features actors Jang Dong-gun, Park Hee-soon, Kim Myung-min and Lee Jong-suk. The movie unfolds as a V.I.P. from North Korea (Lee) is suspected to be a serial killer. Different people, including a cop (Kim), a National Intelligence Service agent (Jang) and a North Korean spy (Park) all work to become the first to catch the suspect. It will not be the first political film from the filmmaker. “The Unjust” (2010), which he wrote the script for, dealt with politics between a cop, a prosecutor and the mafia, and his “New World” (2012) depicts the internal politics among gangsters. The release date hasn’t been determined.

Highly-regarded filmmaker Bong Joon-ho, whose well-known movies include “Snowpiercer” (2013), “The Host” (2006) and “Memories of Murder” (2003), will release a new science-fiction adventure drama “Okja.” Funded by Netflix with a budget of $50 million, the film depicts the friendship of a girl named Mi-ja who lives deep in the mountains of Gangwon and a mysterious creature named Okja. The story develops as Okja suddenly goes missing. The movie will delve into the strange adventures of the girl and the creature. “Okja,” which features big Hollywood stars such as Tilda Swinton, is slated to drop in the early part of the year at local theaters, and will also be available in 190 countries through Netflix.

“With God” is a fantasy drama that depicts the 49-day journey of afterlife messengers in the human world while trials of dead people are being held in the underworld. Helmed by Kim Yong-hwa of the 2006 romantic comedy “200 Pounds Beauty,” the upcoming film is an adaptation of the webtoon that goes by the same title. Around 80 percent of the film, in which actors Ha Jung-woo, Cha Tae-hyun and Ju Ji-hoon appear, has been completed as of last month. The release date, however, hasn’t been decided.

Those who wish to learn more about the Democratization Movement in 1980s Gwangju, where students clashed with soldiers to protest the authoritarian rule of military junta leader Chun Doo-hwan, should check out “Taxi Driver,” when it drops in summer. The film depicts the journey of a German journalist named Peter who heads to Gwangju to report on the shocking news that was suppressed from being covered by the mass media in Korea. The movie unfolds from the perspectives of two outsiders: the foreign journalist and his taxi driver that had no idea about what was happening in Gwangju (as the event wasn’t shown on the news). It is helmed by Jang Hun of the award-winning “The Front Line” (2011), and stars actor Song Kang-ho and German actor Thomas Kretschmann.

Last year saw a number of historical films such as “The Last Princess” and “The Age of Shadows.” The trend will continue with director Ryoo Seung-wan’s “Battleship Island,” which refers to Hashima Island, where Korean forced labor was used. Set during the Japanese colonization of Korea (1910-45), the movie looks into the social hierarchy and relationships through the journey of 400 Koreans that strive to escape from the Japanese island, where victims had been forced to work. Starring actors Hwang Jung-min, So Ji-sub and Song Joong-ki, the film is scheduled to be released this summer.