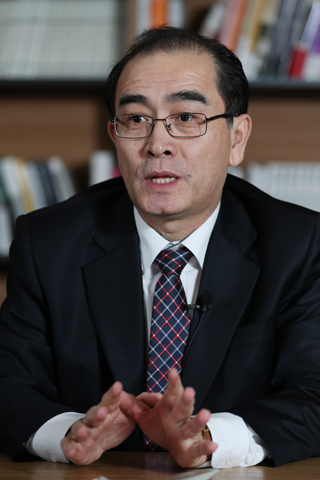 North Korean leader Kim Jong-un has no intention of giving up the country’s satellite program, a cover for its long-range missile program, and gave orders last year to embassies overseas to separate that program from any discussions of its nuclear and missile programs, one of the highest-ranking defectors said in a report.

According to an analysis of on Kim Jong-un’s New Year address by Thae Yong-ho, North Korea’s former deputy ambassador in London who defected to the South in July, the North Korean leader is “determined not to put the country’s satellite development on the negotiating table with Seoul and Washington” even if they hold talks on its nuclear program and development of other missiles.

The report was obtained by the JoongAng Ilbo.

Thae, the highest North Korean official to have defected in years, noted in the report that Kim gave orders to diplomatic officials overseas that they should distinguish the country’s satellite program from its nuclear arsenal and enhanced missile capabilities. Thae’s analysis bolsters an assumption that the Kim regime will continue its intercontinental ballistic missile (ICBM) program in spite of international sanctions.

“Kim Jong-un slyly put the satellite program, which belongs to its ICBM program, under the category of science and technology achievements of 2015,” said the 56-year-old former official, who came to Seoul with his wife and two sons. Thae writes that the categorization indicates Kim will never use the satellite program as a bargaining chip in any negotiations.

The North’s long-range missile program could eventually allow it to fire a missile capable of reaching the continental U.S., possibly with a miniaturized nuclear bomb atop. Analysts have long considered the North’s satellite development as being synonymous with ICBM development. The same engine technology is used.

“Kim has just given incoming administrations in both Seoul and Washington tricky homework to do,” analyzed Thae.

In a New Year message delivered on Sunday, Kim, wearing a suit and necktie, said Pyongyang was in the “final stage” of preparing to test-fire an ICBM and claimed it had “soared as a nuclear and military power in the East” that no foreign states “dare encroach upon.”

For a North Korean ICBM to hit the Western U.S., its scientists must master technology that will enable its missile to re-enter the atmosphere, enduring temperatures of over 7,000 degrees Celsius (12,632 degrees Fahrenheit). Pyongyang claimed one of its missiles fired in June had successfully re-entered the atmosphere after reaching an altitude of over 1,400 kilometers (870 miles), signifying it had conquered re-entry technology necessary for ICBMs.

On Kim’s declaration that he will seek to bolster the country’s “self-reliant defense capability and a capability for a preemptive strike,” Thae defined the former as its nuclear capability and the latter as ICBM capability.

“In a departure from the past, Kim has shown both nuclear and ICBM cards at the same time and signaled he could play with them at the same time,” said Thae. He described that tactic as “blatant blackmailing.”

The former North Korean diplomat also noted the North Korean leader was “feeling a great sense of anxiety out of fear that he could fail to draw recognition as a nuclear state” from the international community, adding Kim’s biggest interest this year lies in his nuclear and missile programs.

Thae also noted it was very “unusual” for Kim to have stated in his address that it was “imperative to take active measures” to improve inter-Korea ties. He said this signified Kim’s desire to resume South-North interchanges in the private sector now that all official dialogue between the two governments is shut down.

“The North will employ a two-front strategy in which it will continue military provocations while proposing talks to support those in the South calling for dialogue,” he wrote.

On Kim’s surprising statement of self-reflection in the address - he said, “I spent the last year in agony and self-condemnation because my capability [as a leader] fell short of my goal” - Thae said Kim was trying to justify executions and purges of North Korean officials on charges of irresponsibility and corruption to divert rising complaints from the people.

“He is trying to transform his image as God to a God in agony,” said Thae. On Kim’s pledge that he would not let the glory days of Kim Il Sung, North Korea’s founder and his own grandfather, become a thing of the past, Thae said it was an admission that conditions now are “worse than what they were under Kim Il Sung.”

Thae drew up the report as a researcher at the Institute for National Security Strategy, a public research center under the South’s National Intelligence Service.