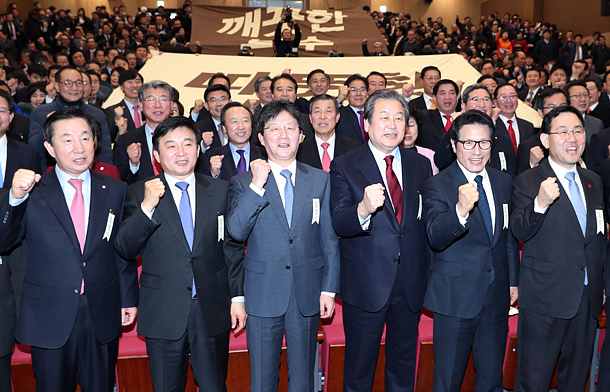 Proponents of the planned New Conservative Party for Reform pose for a photo in the National Assembly on Thursday. The steering committee for Korea’s new conservative party laid out its policy platform, anchored on political reform, inclusive growth and more generous welfare offerings, drawing a line with the scandal-fraught Saenuri Party. Key exponents of the splinter party, tentatively named the New Conservative Party for Reform, held the first gathering of founding members. A total of 1,185, including 29 lawmakers and two provincial governors, signed up for the nascent party formed by defectors from the conservative ruling Saenuri Party. The reform-minded conservatives pronounced that they will pursue a “clean and warm conservatism.” The group gathered together a number of former Saenuri bigwigs, such as Gyeonggi Gov. Nam Kyung-pil, Jeju Gov. Won Hee-ryong and former Seoul Mayor Oh Se-hoon. Former UN Secretary-General Ban Ki-moon’s close associate Chung Tae-ik, honorary head of the Korean Council on Foreign Relations, is also on the list. They are currently working on finalizing the party’s name. [YONHAP]