Opposition meets with Wang Yi to talk about Thaad

Opposition meets with Wang Yi to talk about Thaad 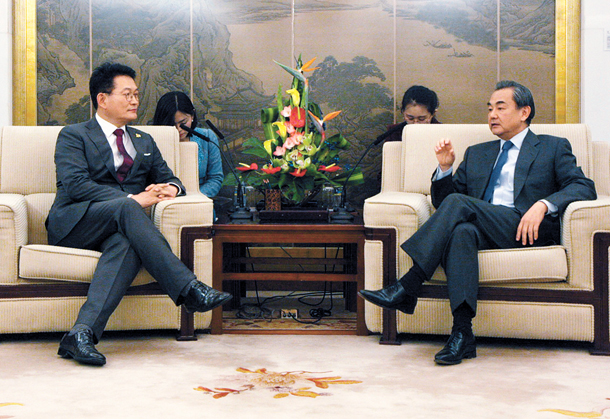 Seven lawmakers of the main opposition Minjoo Party of Korea kicked off their three-day Beijing visit Wednesday and met with Foreign Minister Wang, who emphasized the importance of hard-won results over the past 25 years since the two countries established diplomatic relations.

The delegation of assemblymen, led Rep. Song Young-gil, a four-term lawmaker and former Incheon mayor, spoke with Wang for about an hour, during which the Chinese foreign minister again raised concern that the deployment of the U.S.-led Thaad battery would harm its strategic security interests and may hinder bilateral relations.

“We need to develop Korea-China relations as we greet 25 years of bilateral ties,” Rep. Song told Wang, “but there are slight issues recently. However, as Korea and China are in a relationship of strategic partnership, I believe any problem can be solved.”

He continued, “I also believe that the North Korea nuclear issue and the Thaad issue can be solved together.”

Seoul and Washington announced the decision to deploy the Thaad antimissile system to Korea last July, in response to Pyongyang’s heightened nuclear and missile provocations, a move strongly protested by Beijing.

Beijing has especially been concerned that Thaad’s powerful X-band radar could be used to spy on them, though Washington has said the scope of the radar would be limited to defending against North Korea.

China has since taken a series of retaliatory measures against Korean businesses, particularly its Hallyu, or Korean cultural wave, exports. It also recently banned charter flights to Korea in January and February without stating a specific reason.

The ruling Saenuri and new conservative party condemned the visit to Beijing, describing the visit as an act of “shameful diplomacy,” emphasizing that national security must not be compromised and that this is a bipartisan issue.

“The Minjoo lawmakers did not state Korea’s position on the Thaad issue and just made a request to ease [China’s] trade retaliation,” Chung Woo-taik, floor leader of the Saenuri Party, said Thursday, “which is a dumbfounding, shameful act of diplomacy that bargains away national security over money.”

“It would be treacherous to leave national security to a power that practices such shameful diplomacy,” said Rep. Yoo Seong-min at a meeting preparing to form a new conservative party after defecting from Saenuri at the National Assembly, likewise condemning the Minjoo’s visit.

“Thaad is needed to protect the lives of our people and is a matter related to the Republic of Korea’s national security” Yoo, a presidential hopeful, continued.

“We need to adhere to the principle that matters related to military sovereignty and national sovereignty cannot be comprised or yielded to another country under any circumstance.”

The Minjoo Party shot back that the government was not even able to meet with Donald Trump aides and that the lawmakers meeting with Wang was doing what the Korean diplomats should be doing.

“Frankly, the [Korean] Ministry of Foreign Affairs channel was not even able to meet in-depth with [President-elect Donald J.] Trump aides,” said Rep. Woo Sang-ho, floor leader of the Minjoo Party. “Isn’t it a good thing that opposition lawmakers were able to meet with Chinese Foreign Minister Wang Yi, something South Korean Ambassador to China Kim Jang-soo should be doing.”

The Korean Ministry of Foreign Affairs on Thursday summoned Chinese Ambassador Qiu Guohong to protest Beijing’s reaction to the Thaad deployment. Deputy Minister Kim Hyoung-zhin met with Qiu to discuss the Thaad issue, Chinese fisherman illegally operating in Korean waters and the 25th anniversary of the bilateral ties, according to the Foreign Ministry spokesman Cho June-hyuck.

Cho described the deployment of Thaad to Korea as a “sovereign right and a self-defensive measure” that “should not have an effect on the advancing of relations between the two countries.”

Foreign Minister Yun Byung-se said on Monday, in response to China’s retaliatory measures, “We will respond as necessary, when needed.”