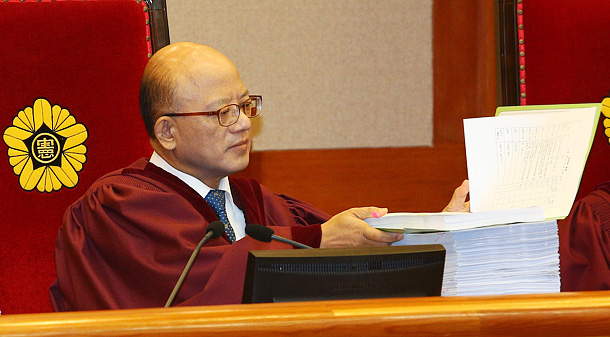 Lawyers for President Park Geun-hye argued before the Constitutional Court on Thursday that massive street protests demanding her dismissal were initiated by North Korea sympathizers and investigations of an abuse of power scandal involving Park and her associates were politically motivated.

The court heard arguments from both the National Assembly, which impeached Park, and Park’s lawyers in the morning after confirming the president’s absence. Park skipped the first hearing in her impeachment trial Tuesday and opening arguments were delayed to the second session.

On Dec. 9, 2016, the National Assembly passed a motion to impeach Park for having violated the Constitution and criminal laws by allowing a secret inner circle, including longtime friend Choi Soon-sil, to interfere in state affairs. It also accused Park of having failed to protect the lives of citizens due to nonfeasance during the sinking of the Sewol ferry on April 16, 2014. A total of 304 passengers died after a delayed government response.

Rep. Kweon Seong-dong, head of the National Assembly’s Legislation and Judiciary Committee, who also headed the impeachment committee, gave an opening argument by introducing all specific grounds for the legislature’s decision to impeach.

“Park was oblivious of her duties as the head of the state and the leader of the administration and committed grave violations of the Constitution and laws while performing her duty,” Kweon said. “In order to protect the Constitution, allowing her to continue serving in the presidency is unacceptable, and it is our judgement that she no longer qualifies to oversee state affairs. In order to protect the Constitution and restore the damaged constitutional order, the National Assembly passed the impeachment motion to remove her from the presidency.”

Rejecting all grounds cited by the legislature in the impeachment motion, Park’s lawyers said the anti-Park candlelight vigils, joined by more than 10 million people around the country over the past weeks, do not represent public sentiment.

“How can you say that the rallies, a de facto declaration of war on the Republic of Korea, are public sentiment?” Seo Seog-goo, one of Park’s lawyers, said.

He continued that the massive rallies held over the past weeks in central Seoul were initiated by the Korean Confederation of Trade Unions, labeling the umbrella labor union a pro-North Korea group. Seo said the union members also called for the release of Lee Seok-gi, a former lawmaker of a disbanded party convicted of treason.

Seo also said the composer of a song used during the vigils was arrested four times for writing songs in praise of the late North Korean founder Kim Il Sung.

As Seo made those remarks, some of the public observers in the gallery burst into laughter. Fifty four observers watched the second hearing; 44 of them were selected in advance from 544 online applicants and 10 were allowed entry on a first-come-first-served basis.

The ideological argument appeared to be a new defense strategy by Park’s team to fight the impeachment.

“The president’s side made all possible moves to stop the impeachment,” a lawyer from the impeachment committee told the JoongAng Ilbo. “It is also the expression of their intention to be judged only by laws, not by public sentiment.”

While Park did not appear in the courtroom, she recently denied all charges at a tea time meeting with reporters on Sunday.

Lawyer Lee Joong-hwan, another member of Park’s legal delegation, pleaded her innocence of all accusations, particularly bribery and the undue power she allegedly allowed Choi in state affairs. He said the accusations were not verified facts, because they were largely based on indictments by the prosecution and media reports.

He also said a third-party bribery charge involving Park, Choi and Samsung Group, currently being investigated by an independent counsel, is groundless.

Seo questioned the political neutrality of the prosecution’s initial investigation into the Choi scandal and the ongoing probe by the independent counsel.

The prosecution concluded its investigation into the scandal in November and indicted Choi and two former Blue House aides. Although it named Park a co-conspirator in all crimes, she was not formally prosecuted due to her presidential immunity from criminal investigation.

Seo said the indictments of Choi and other aides cannot be used as grounds for impeachment because they are merely opinions of the prosecution and Park was never questioned. Last year, Park initially said she would cooperate with the probe, but later rejected repeated requests by the prosecution for face-to-face questioning. He also challenged the neutrality of Independent Counsel Park Young-soo because he was selected by opposition parties.

Park’s lawyers denied the National Assembly’s argument that Choi was a part of a secret inner circle with strong influence over the president. They said Park listened to Choi’s opinions and used them as reference points but never allowed her systemic influence over state affairs. They also argued that the president properly performed her duty to protect the people’s lives during the Sewol’s sinking. They, however, did not submit a statement, demanded by the court, on Park’s specific whereabouts and actions during the crucial early hours after the accident.

In the afternoon, the court continued the session to hear testimonies of four witnesses but only one showed up. The court summoned An Bong-geun and Lee Jae-man, former presidential secretaries, and two staffers, Lee Yeong-seon and Yun Jeon-chu. The whereabouts of An and Lee Jae-man were unknown, while Lee Yeong-sun submitted a notice to the court for his absence. Yun, a former health trainer hired to support Park’s personal affairs, appeared and gave testimony. The impeachment committee questioned her about Choi’s role in the Blue House and Park’s specific whereabouts and actions on April 16, 2014, the day of the Sewol’s sinking, but Yun either refused to answer or said she did not remember clearly.

On the morning of the Sewol’s sinking, Yun said she was working with Park in her residence inside the Blue House compound. Asked about the work, Yun said, “I do not remember accurately what it was, but it was her personal or unofficial business.”

News reports of the Sewol’s accident began to be broadcast at 9:19 a.m.

A Constitutional Court official told the JoongAng Ilbo on Thursday that witnesses refusing to show up will not delay its deliberations.