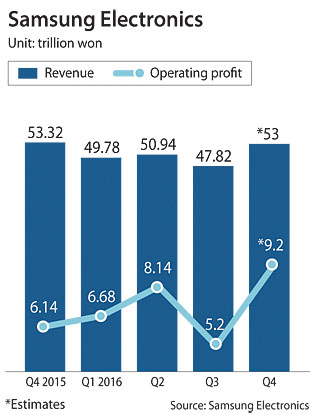 Samsung Electronics posted an earnings surprise for the fourth quarter 2016, brushing off concerns that loomed after pulling its exploding Galaxy Note7 phablets off shelves, largely boosted by a rise in semiconductor prices and stable sales of other phones in the Galaxy family.

In an earnings guidance release Friday, Samsung Electronics posted 9.2 trillion won ($7.7 billion) in operating profits in the fourth quarter last year, a surge of 76.92 percent from the previous quarter and 49.84 percent year on year. Its sales revenue was approximately 53 trillion won.

It is the first time in 13 quarters that Samsung’s operating profits topped the 9 trillion won mark, after the third quarter of 2013 when the company reaped record-high profits of 10.16 trillion won.

Though the figures are still estimates of the company’s consolidated earnings, industry insiders attribute the lift to the price raise of semiconductors and the success of marketing Galaxy S7 smartphones in diverse models.

“Unprecedented short supplies in the semiconductors market and an apparent price hike of related products led to a performance boost for the electronics giant,” said Claire Kyung Min Kim, an analyst from Daishin Securities.

The price hike was largely due to the consecutive release of new products by Chinese smartphone and personal computer makers. The advent of the Internet of Things called for a surge in demand for memory chips.

“As Samsung Electronics is essentially the dominant supplier for 3D NAND and midsize organic light-emitting diodes [OLED] in the world’s markets,” said John Gang Ho Park, an analyst from Daishin Securities. “The company must have benefitted from increasing chip demand from Chinese companies.”

While earnings broken down by each business division will only be confirmed after final results are released later in the month, industry estimate consensus on earnings from Samsung’s device solutions business, which includes semiconductors and display division, is roughly 6 trillion won.

A weaker Korean won was also a booster for the semiconductor business, as Samsung mostly trades its memory chips in U.S. dollars. According to data from the Bank of Korea, the won depreciated to an average 1,157.4 against the greenback in the fourth quarter, compared to 1,121.4 in the third quarter.

The company’s smartphone sales also saved face after being hit hard with a loss of roughly $6 billion, caused by Galaxy Note7 phablet explosions and their subsequent discontinuation last year. Samsung played hardball with its earlier releases, the Galaxy S7 and its more popular curved-edge cousin, the Galaxy S7 Edge, to fill the void created by the Note7’s fallout.

Industry insiders estimate earnings from Samsung’s IT and mobile business will be recovered to over 2 trillion won from a steep fall it endured in the third quarter. While the giant had posted 4.3 trillion won profits in the second quarter last year, the figures had dived to 100 billion won in the July-September quarter influenced by the loss incurred from the Note7 scandal.

The consumer electronics business is also expected to add 800 billion won to the profits report.

Thanks to the surprise earnings report, shares of Samsung Electronics on Friday closed at 1.81 million won, up 1.8 percent or 32,000 won from the previous trading day.

As this year’s performance for Samsung is expected to be more favorable than last year, thanks to the strong semiconductor market and scheduled launch of the new S8 phone, brokerage houses are raising their target stock prices for the giant conglomerate.