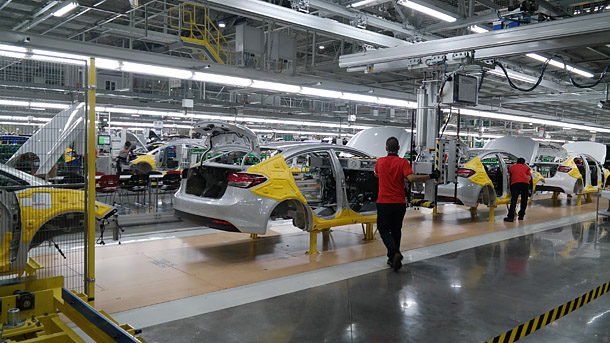 Kia Motors completed construction of its Mexico factory last year. The automaker is seeking to expand its presence in the North American automobile market. [JOONGANG ILBO]

Donald J. Trump’s attempt to protect the U.S. manufacturing industry and job market is expected to deliver a blow to Kia Motors, which recently built a plant in Mexico and was banking on it to act as a bridge to the North American market.

On Twitter on Thursday, the president-elect slammed Toyota Motor’s plan to produce cars in Mexico and export them to the United States without having to pay taxes based on the North American Free Trade Agreement (Nafta).

It was the first time Trump took aim at a foreign carmaker.

“Toyota Motor said will build a new plant in Baja, Mexico, to build Corolla cars for U.S.,” Trump said on his Twitter feed.

The Japanese automaker plans to build a factory in Guanajuato, not Baja. The Baja plant, which was established in 2002, produces Tacoma trucks.

Toyota, however, said it had already invested $21.9 billion directly in the United States, creating 10 production lines, 1,500 dealerships and generating 136,000 job positions in the past years.

“Production volume or employment in the U.S. will not decrease as a result of our new plant in Guanajuato, Mexico, announced in April 2015,” Toyota said in a statement.

Kia Motors could become Trump’s next target, considering its recent $3 billion investment in the production line based in Pesqueria, Mexico, which started operating last May.

Its production capability is 400,000 vehicles a year, and Kia Motors plans to export 80 percent of them to the North American region.

“Toyota and Ford were all about canceling plans, but Kia Motors has already built a production line and it is in operation,” a Kia Motors spokesperson said. “The initial plan for the Mexico plant was to back up rising demand in the United States. However, even under the worst-case scenario, there are other countries that we are considering for export of the Mexico-produced vehicles.

“At the moment, we are closely watching what Trump’s next move will be,” the spokesperson added.

Trump started his protectionism initiative by pressuring American automakers Ford and General Motors to withdraw their plans to manufacture cars south of the border.

As a result, Ford canceled its $1.6 billion plan to build a Focus manufacturing plant in San Luis Potosi, Mexico, and replaced it with a $700 million project to build an eco-friendly car-oriented plant in its homeland in Michigan.

Trump further threatened General Motors and said he would slap a high tax on its cars made in Mexico that are exported to the United States. GM runs a production line in Ramos Arizpe, Mexico, where it makes the Cruze.

Mexico has become a hub for global automakers because of its cheap labor fees and preferable tax incentives such as free trade agreements with 49 countries. According to the Mexican Automotive Industry Association, Mexican laborers’ daily wages average $40, which is about 30 percent of what must be paid in the United States. Mexico’s auto industry recorded a 18.5 percent year-on-year growth.

According to Bloomberg, Toyota, Ford and General Motors were among the nine automakers who have announced plans worth $24 billion to invest in Mexico since 2010.