[Sponsored Report] Hyundai Motor looks to the future of mobility

[Sponsored Report] Hyundai Motor looks to the future of mobility 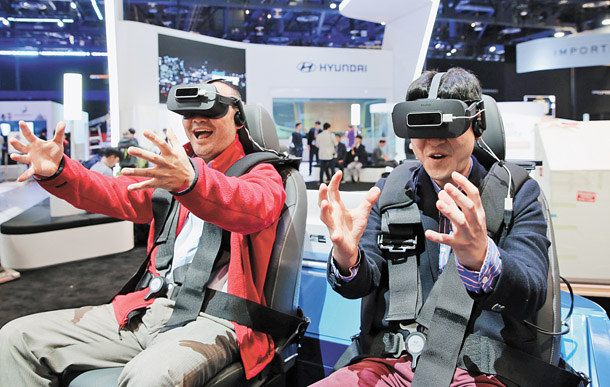 Hyundai Motor Company revealed its vision for future mobility, which will surpass the boundaries of simple transportation and open possibilities for new lifestyles. At this year’s Consumer Electronics Show (CES), the company unveiled three ways it will pursue mobility in the future: Clean Mobility, Freedom in Mobility, and Connected Mobility.

Furthermore, it showcased a number of future technologies that manifest Hyundai’s vision of ‘Innovation for Mobility Freedom,’ such as driverless cars, healthcare technology, a connected car, a wearable robot, and micro-mobility.

“We are at the beginning of a new era that combines different technologies,” said Chung Eui-sun, Vice Chairman of Hyundai Motor Company, “Hyundai Motor Company strives to develop future mobility technology that is eco-friendly, free from external obstacles, and highly connected.”

He also said, “Using such technology, we will make our customers’ lives more convenient and safer.”

Clean Mobility refers to the company’s plan to develop and supply eco-friendly cars, in order to actively respond to urgent environmental issues.

Hyundai Motor is putting forth its utmost effort to produce various eco-friendly cars that not only rely less on fossil fuels but also drastically reduce the amount of emitted pollutants. In particular, it has unveiled the Ioniq Hybrid and Electric, and will introduce the Plug-in hybrid car this year.

Furthermore, last December, Ioniq Hybrid achieved the highest ranking for its fuel efficiency in the US, as reported by the Environmental Protection Agency (EPA).

Not only that, Hyundai Motor demonstrates technological excellence in the hydrogen car market. In 2013, the company developed the Tucson Fuel Cell, the first mass-produced hydrogen car in the world. In 2018, it plans to unveil the next generation hydrogen car, with improved mileage based on hydrogen-exclusive platforms. In 2020, it plans to expand its eco-friendly car line up to 14 products, including 5 Hybrids, 4 Plug-in Hybrids, 4 Electrics, and 1 Hydrogen car.

Freedom in Mobility refers to eliminating various anxieties in autonomous driving and demonstrating technology that ensures a perfectly safe environment.

The company continues to promote supplying and mass-producing technology that allows cars to respond to unexpected situations with the minimum number of sensors. Last year, it revealed driverless car based on Ioniq Electric at the LA Motor Show. In December, it held a trial run of driverless cars in Las Vegas, with the press corps present.

The autonomous Ioniq electric vehicle, which was showcased during CES, met the level 4 standard by the Society of Automotive Engineers (SAE), demonstrating a high technological accomplishment.

Lastly, Connected Mobility is about connected cars, which will function as a hub in the future society. Connected cars will evolve into a moving high performance computer, which is connected to other transportations as well as living and working quarters. Hyundai is pushing to cooperate with global companies like Cisco and start-ups to produce a super-connected intelligent car. This car will be connected to other cars, houses, offices, and even city infrastructures.

The Ionic Electric looks like a common car, unlike other autonomous cars which carry around giant sensors. Healthcare Cockpit combines cars with healthcare technology, providing various services to relax the driver’s body and mind.

The Tucsan connected car allows communication between the car and the house, and upgrades the software automatically.

Also, the smart house concept model displays the future car, which will be connected to houses and offices. In addition, wearable robots assist people by helping the disabled walk, workers prevent injuries, and elderly folks move without much effort.