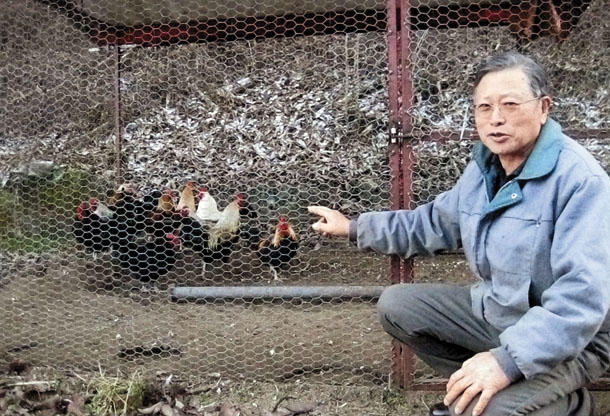 For 35 years, Hong Seung-gab has spent almost half his life restoring the Hyunin native chicken breed at his Hyunin Farm in Paju, Gyeonggi. Starting out as an ordinary poultry farmer, Hong began working to bring back the colorful hues of native Korean chickens in his early 40s. Now, the farm holds some 2,000 native chickens of various shades, such as black, yellow, brown white and grey.

“I will push myself harder to bring back the native chickens that have almost disappeared,” said Hong, “to celebrate the year of the rooster.”

Hong first started the project when he came across a passage in Li Shizhen’s Bencao Gangmu, or Compendium of Materia Medica, drafted in 1578 and regarded as the most comprehensive work in the field of traditional Chinese medicine.

“The book I read in 1982,” Hong said, “said that yellow chickens in the central districts of Joseon [premodern name of Korea] are tasty and healthy.”

Having grown up on a poultry farm from his early childhood, he helped around the house raising chicken from an early age. Hong had already witnessed how the native chicken breed was slowly disappearing from Korea and his nostalgia for the lost breed was made even stronger by the ancient appraisal.

From then on, Hong dedicated his life to restoring and breeding the chicken.

“The restoration began by gathering native chickens from all over the country,” he said, “and we’re working through the selection process, overcoming some errors in between. The native Korean chicken almost went extinct under the Imperial Japanese rule, so I’m working on old records of the chicken’s color to revive its appearance.”

Hong is selectively breeding chickens to approximate a certain ancestral appearance, a process known as breeding back, by using descriptions given in old texts to produce 15 specific colors. While this can be used to develop a certain appearance, it does not mean Hong’s chicken are genetically identical to Korean native chickens.

The value of his project, however, has already been recognized. The black chicken he nurtured on the grounds of his farm was registered in 2012 as the Hyunin Native Black Chicken on the UN Domestic Animal Diversity Information System of the Food and Agriculture Organization.

In the early stages of the restoration process, Hong would visit anywhere he heard had native chickens. He then bred them and selected the chicks with the most vivid feathers to breed the next generation, and so on. The four square-meter (43 square-foot) henhouse he uses provides plenty of room for ten chickens at a time to remain stress-free.

“Native chickens bred in a healthy environment seem to be more resistant to avian influenza,” said Hong. The farm has fortunately stayed out of the reach of AI so far.

But Hong’s meaningful work has not been lucrative. In fact, the farm is barely making ends meet by selling chicks and environmentally friendly fertile eggs. Thanks to Hong’s wife, a civil servant, who took on the responsibilities of the household, Hong could concentrate on his research and work.

Things improved in 2013, when the farm began receiving support from the government to be used as chicken feed and labor fees, as Hong’s work was recognized as being of national importance. In 2012, the farm was designated an animal genetic resource managing farm by the National Institute of Animal Science.

“Among the 15 native chicken breeds the Hyunin Farm has bred, two of them, the black and light brown, are in the last stages of restoration,” said Yeon Seong-heum, head of the department of animal resources development at the NIAS.

“I will fully restore all native chicken breeds across the country over the next generation,” said Hong.