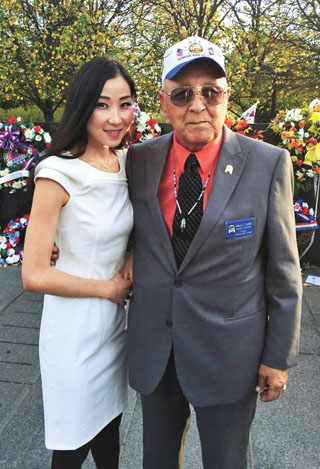 The 33-year-old former spokesperson plans to visit 16 countries that sent troops to Korea during the Korean War, and another five countries that gave medical support. She will travel for four months, starting this month. She plans to make video and audio recordings of those who participated in the war so young people in Korea and abroad can learn from them.

Rangel, who is also a Korean War veteran, was one of the key congressmen that helped pass many resolutions and bills related to Korea, such as the Korean War Veterans Memorial Wall of Remembrance. Rangel retired from politics last month.

“I became interested in Korean War veterans and that is why I lobbied Congressman Charles Rangel to pass a bill honoring them,” Kim said. “I thought that our generation needs to keep records of the veterans across the world while they are still alive.”

She added, “Many countries gathered to help Korea in the past, but now they are gathering once again for the peaceful unification of Korea. I think the end of the Korean War will come when the two Koreas unify peacefully, and I would like to hear from veterans about how they want that to happen. Our grandparents’ generation fought to defend the country, our parents’ generation helped the country to develop and I think the role for our generation, regardless of where we reside, is to have it become unified.”

Kim said she is contacting Korean War veterans around the world through Korean communities and veterans’ associations located abroad. “I won’t be able to meet a lot of them at once and I plan to meet one to two people from each country,” she said.

Kim added that she has already been surprised by war veterans even before she had a chance to meet them in person.

“A translator in Colombia told me that the Korean War was the first and only war that the country has ever been involved in,” Kim said. “I also heard that Ethiopian soldiers who came to Korea donated their salaries to help war orphans. There also is a popular song in Sweden that is based on the Korean War.”

Colombia’s first war, however, was the Venezuelan War of Independence from 1810 to 1823.

Kim also said most of the countries that helped South Korea in the war 67 years ago have memorials and monuments to remember the war.

“I also found out many countries,” she said, “which I never thought would remember the war, were remembering it. The Korean War is not ‘the forgotten war.’”