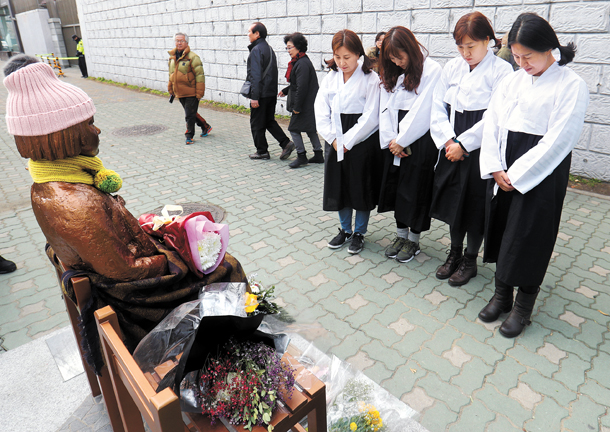 A group of women dressed in hanbok on Friday pay respect to a bronze monument representing the victims of Japan’s wartime sexual slavery, installed behind the Japanese consulate in Busan last week. On the same day, Tokyo announced it will recall its ambassador to Korea and suspend a bilateral currency swap talk over the statue. [YONHAP]

Japan announced plans to recall its ambassador from Korea and suspended a bilateral currency swap talk on Friday as part of a strong retaliatory campaign against Korea over the installation of a new monument commemorating victims of Japan’s wartime sexual slavery.

The Japanese government said Friday it ordered the temporary recall of Japanese Ambassador to Korea Yasumasa Nagamine and Yasuhiro Morimoto, consul general in Busan. The announcement was made by Chief Cabinet Secretary Yoshihide Suga after a cabinet meeting in the morning.

“We have strongly demanded the Korean government to take a proper action concerning the statue issue, but no improvement was made,” he said.

A bronze statue of a young girl in hanbok seated on a bench, similar to the Peace Monument across from the Japanese Embassy in central Seoul, was installed on Dec. 28 near the back gate of the Japanese consulate in Busan. The Dong District Office of Busan removed it, but allowed its reinstallation two days later after its operation was paralyzed by a flood of public complaints.

The installation of the statue, according to the civic group, the Committee of Youth for Erecting a Peace Monument, was meant to coincide with the first anniversary of the Dec. 28, 2015 agreement between Seoul and Tokyo to settle the issue of the Japanese military’s forced recruitment of Korean women into sexual slavery during World War II.

The deal was intended to end the long-running diplomatic battle over the “comfort women” issue by agreeing to a Japanese government apology and a multimillion-dollar fund for the victims. Korea later set up a foundation with Japan’s 1 billion yen ($8.6 million) to support the victims.

While Seoul and Tokyo aimed to resolve the issue with the 2015 deal, surviving victims and the Korean public have expressed dissatisfaction toward the arrangement.

“In the 2015 agreement, we confirmed that the settlement is final and irreversible,” Suga said, “but the new statue was erected, having an undesirable effect on the Japan-Korea relations.”

Japan also said it will postpone high-level economic cooperation talks with Korea. It also suspended talks on a new currency swap deal with Korea. Japanese diplomats of the consulate-general in Busan were also ordered to not attend any public events related to the city.

Suga said the Japanese government will continue to make strong demands to the Korean government and local authorities to remove the new statue as soon as possible. “Korea must respect the agreement faithfully, including the statue issue,” he said.

Korea’s Ministry of Foreign Affairs issued a statement to express strong regret over Japan’s measures. “We are extremely regretful about the Japanese cabinet’s decisions,” said Cho June-hyuck, spokesman of the ministry. “The government wants to emphasize once again that the bilateral relations must be developed continuously based on trust, although there are some issues between the two countries.”

Summoning the Korean ambassador in Tokyo to Japan’s Foreign Ministry to issue a protest would have been a normal diplomatic response, and Japan made an extraordinarily strong response by skipping the summons and recalling the ambassador and consul general, a Foreign Ministry official here said.

“It is a measure with a strong diplomatic impact,” said the ministry official. “We didn’t expect them to go this far.”

The Ministry of Strategy and Finance also issued a statement to complain about Tokyo’s decision to suspend the currency swap talks. “It is regretful that the discussion was stopped due to political and diplomatic reasons,” it said.

Seoul and Tokyo started the bilateral currency swap program, worth $2 billion, in July 2001. The amount was increased to $70 billion in October 2011. The program, however, ended in February 2015 and was never renewed due to the strained bilateral relations.