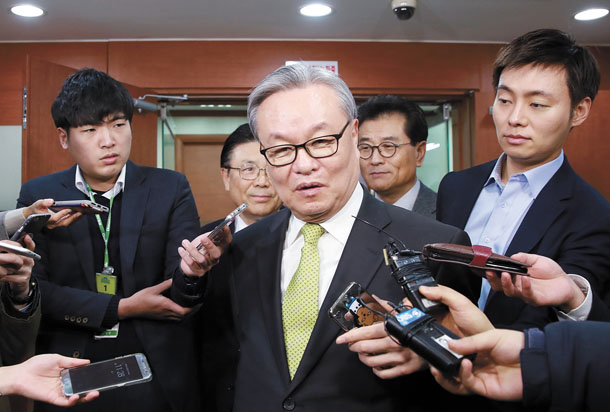 Rep. In Myung-jin, interim head of the Saenuri Party, is surrounded by reporters leaving the National Assembly in Yeouido, western Seoul, Friday, after failing to convene a standing committee to select members of an emergency council. [YONHAP]

Saenuri interim chief In Myung-jin’s move to purge party lawmakers aligned with the pro-Park Geun-hye faction suffered a setback on Friday as he failed to convene the party standing committee to select members of the emergency council, apparently due to pro-Park members’ obstruction.

In, who was named last month as head of the Saenuri’s emergency council to contain damage to the party caused by an unprecedented abuse of power scandal that led to the president’s impeachment, unexpectedly announced a plan the day before to convene the standing committee Friday.

In’s calling for the convention came after core Park loyalists refused to defect, despite In’s demand that they do so by Friday to take responsibility for the Choi-gate scandal.

The 70-year-old pastor’s demand was scoffed at by key members of the pro-Park faction, especially eight-term-lawmaker Suh Chung-won, who went so far as to call In “dictatorial” and a “lying pastor.”

The Saenuri leadership had planned to convene the meeting at 2 p.m. but as the number fell short, In and other party leadership members waited nearly two hours before giving up on the event.

Since In’s ultimatum, issued on Dec. 30, former Saenuri chief Lee Jung-hyun and five-term lawmaker Jeong Kab-yoon submitted their defection notices to the party and about 40 Saenuri lawmakers considered pro-Park stated they would follow In’s decision. But Suh and Choi, considered the two foremost pro-Park lawmakers, vowed to stay and accused In of causing internal strife. The Saenuri leadership held pro-Park members directly accountable for the failed attempt to hold the committee meeting.

“What happened today exposed the true face of those within the party who put this country in ruins,” said In, referring to pro-Park members. Saenuri floor leader Chung Woo-taik said there were attempts by party members to keep their vested interest in the party at a time when the party was struggling to win back public trust. “We will reconvene the meeting next week,” said Chung.

The failure to convene the session raised speculation that In might declare he was done with the Saenuri Party out of disappointment and protest against pro-Park members. But In said he would contemplate what he could do to make the Saenuri move forward and would soon lay out his plan.

While In and other leadership members accused Park supporters of having obstructed the party meeting, the pro-Park faction denied this. One associate of Choi Kyung-hwan, former finance minister and a longtime Park loyalist, was quoted by the JoongAng Ilbo as saying that Choi “had nothing to do with the failed meeting.”