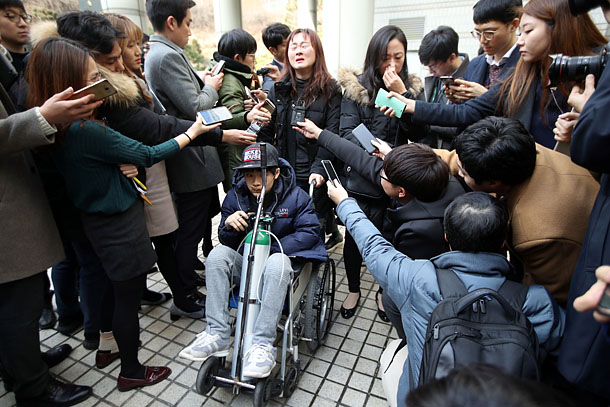 The mother of a victim of toxic humidifier sterilizers cries Friday at the Seoul Central District Court after the sentencing of Shin Hyun-woo, former CEO of Oxy Reckitt Benckiser’s local unit, with a seven-year-prison term for professional negligence that allowed the selling of Oxy-line products. The commercial sale of the harmful products made 181 people ill, of whom 73 died. John Lee, another former head of the troubled company who is currently CEO of Google Korea, was acquitted due to lack of evidence. [YONHAP]

A local court on Friday sentenced Shin Hyun-woo, former CEO of Reckitt Benckiser Korea, to seven years in prison for professional negligence that led to the deaths of dozens of people who used toxic humidifier sterilizers, giving the first verdict more than five years after victims went public with their suffering.

The Seoul Central District Court gave Shin, who headed Oxy Reckitt’s South Korean unit until 2005, a seven-year-prison term, the maximum legal punishment for professional negligence, for having sold Oxy-line humidifier sterilizers without safety checks, which could have found harmful chemical substances in the products and prevented commercial sale.

“The company blindly believed its products were safe for consumers without undergoing a safety examination process to ensure they bore no biological harm,” said the court in a deliberation, adding that the U.K.-based company’s local unit under Shin’s leadership deceived people by labeling its products with safety certificates.

“As a result, hundreds of consumers who purchased humidifier sterilizers, believing they were safe because of such labels, have suffered greatly, and some have even died,” said the court, citing the grave psychological trauma that families have also suffered from seeing their loved ones fall ill.

People started contracting pulmonary illnesses and developing other health issues after they started putting sterilizers in the water in humidifiers. The humidifiers worked fine with regular water, but consumers believed that by adding sterilizers to the water they could prevent mold buildup.

Because of its large market share, the Oxy-brand sterilizer sickened the largest number of people - 181 people fell ill after using Oxy’s humidifier sterilizer, of whom 73 died.

The court also sentenced two former heads of Oxy research center to seven years in prison and gave a five-year prison term for a former senior researcher for professional negligence. The court ordered Oxy Reckitt to pay 150 million won ($126,000) in fines. But the court acquitted John Lee, who headed Oxy’s South Korean unit from 2005 to 2010 of all charges, citing lack of evidence. The acquitted Lee is the current CEO of Google Korea.

Shin’s sentence and Lee’s acquittal are substantially lighter that what prosecutors sought. The prosecution demanded a 20-year-jail term for Shin and 10-year-term for the current Google Korea chief.

While the court ruled Shin was guilty of professional negligence, it ruled that Shin and other former Oxy officials had not committed fraud. The court judged that while former Oxy officials sold harmful products without going through safety checks, they were not aware of the products’ harmful effects and believed they were safe to be used. To constitute fraud, it needs to be proven that a suspect knowingly deceived victims.