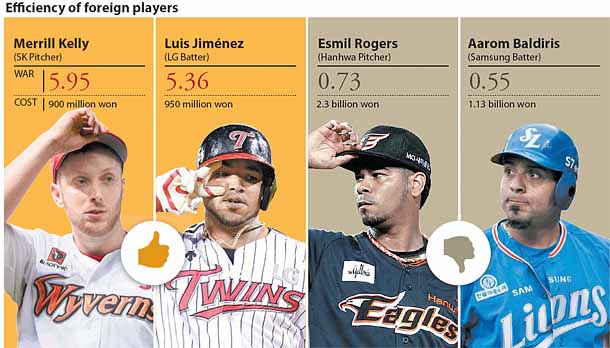 After the elimination of the $300,000 and 25 percent contract renewal increase cap on foreign players’ annual salary, including signing bonuses and incentives in 2014, the cost of signing foreign athletes has been constantly getting higher.

Signing costs are climbing due to foreign players accounting for a larger part of teams’ strength. This year, of the 42 foreign players who, at some point, played for the 10 teams, their Wins Above Replacement (WAR) total was 84.71 and amounted to 23 percent of the overall figure. In the Korea Baseball Organization (KBO), there are currently 27 foreign players total. 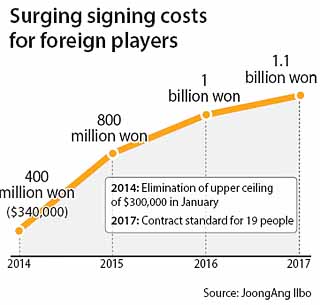 Considering the contribution of foreign players, based on their WARs, perhaps the cost-benefit of foreign players’ signing cost of 33 percent is unwarranted. WAR is an index used in Sabermetrics, the statistical analysis of baseball, used to evaluate a players’ overall value. WAR 1 means, compared to a replacement player, the player in question would produce one more win.

On the other hand, Hanwha’s foreign players’ active weight was not more than 12 percent. Esmil Rogers was out due to an elbow injury in the early season and Alex Maestri was in a slump. Hanwha’s two foreign replacements, Eric Surkamp and Fabio Castillo, proved insignificant in terms of activity.

The Samsung Lion’s Allen Webster and Aaron Baldiris also left the Future’s League due to injuries and slumps. The Samsung foreign players’ were analyzed as constituting a WAR of -0.10. The cost for foreign players adding WAR 1 is calculated to average 400 million won. Compared to last year, when it cost 300 million won, the efficiency of investment has fallen.

Lee Young-hoon, professor of economics at Sogang University, explained, “The top three this year are Doosan, NC and Nexen, who did well in finding undervalued players.”

They sought to moneyball, or buy undervalued players and sell overvalued ones. For three years, NC and Nexen’s investment efficiency was the best — WAR 1 to 150 million won. The two teams have proficient scouts specializing in sabermetrics for foreign players.