In the new year, Lee Ju-yeon is primed to shine : The actor starts 2017 with promising roles in upcoming film, drama

In the new year, Lee Ju-yeon is primed to shine : The actor starts 2017 with promising roles in upcoming film, drama 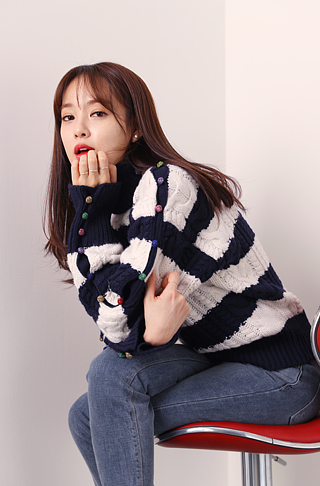 For 29-year-old actor Lee Ju-yeon, the new year has a special meaning. She stepped into the entertainment business as a singer and member of the girl group After School, but quit the group in 2014 and has pursued a career as an actor ever since.

She makes a promising return to screen this month in the film “The King,” set to be released on Jan. 18, as well as the SBS drama series “Saimdang, Light’s Diary,” which debuts on Jan. 26.

The upcoming film “The King” is a crime flick that revolves around prosecutor Tae-su’s (Zo In-sung) ambition to stand at the center of power amid a change of regime. Lee plays a supporting role, appearing for only a few minutes, but it’s a crucial part of the story.

“The film centers on Tae-su’s life,” said Lee. “I appear during the days when Tae-su was a prosecutor, playing the role of a top celebrity. She’s an actress who’s an icon of purity and innocence.”

Apart from Zo, the film stars a number of other veteran actors like Jung Woo-sung, Bae Seong-woo and Kim A-joong. Lee also expressed her feelings about sharing the stage with these well-known actors.

“Bae helped me a lot. We were required to take numerous shots, doing the same act over and over again, which was fun but also very tiring. I relied quite a lot on Bae.

As for Zo, I think he gets a bit shy around strangers, or at least with me. I’m a shy person too, but I tried to approach him since it’s important to get along with others when shooting films.”

The story goes back and forth between the Joseon Dynasty and the present, depicting Shin’s passion for art and her love story. Lee plays the role of a young princess in the past and a university student in the present.

“The storyline is very captivating, so I can assure that the drama will gain a lot of popularity,” said Lee. “This also means that a lot of viewers will see me act. This is my first time appearing in a period drama, so I’m worried that many might think, ‘Her acting is not that great.’

“It wasn’t easy since I was also working on a play at that time. I had two scripts to concentrate on. I was also one of the youngest actors in the drama, so that made me quite nervous too. Although I worked hard, I’m expecting some critiques as well.”