After year of tumult, culture fields seek direction : Major initiatives under Park administration have been delayed

After year of tumult, culture fields seek direction : Major initiatives under Park administration have been delayed 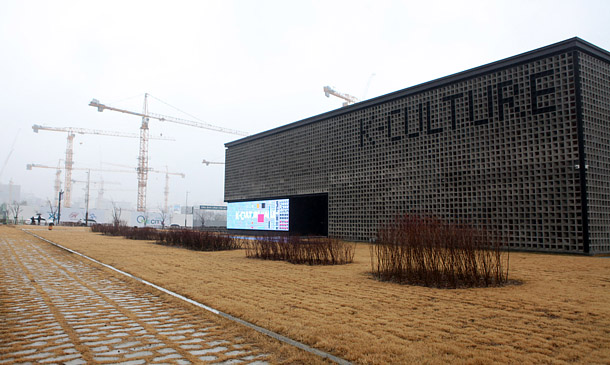 A recent photo of K-Valley in Goyang, Gyeonggi. The future of the venture complex for culture startups remains uncertain as the culture ministry is scaling down projects accused of having ties to Choi Soon-sil, the confidante of President Park Geun-hye. [YONHAP]

The year 2016 will go down in history as a brutal one for Korea’s culture industry.

Many large cultural projects turned out to be the ideas of Cha Eun-taek - the TV commercial director and close friend of Choi Soon-sil, the confidante of President Park Geun-hye - or Cha’s friends.

The companies that won these projects’ contracts were usually the people close to Cha or Choi. Some are also accused of pocketing unfair profits from the projects. For this reason, some go as far as to say Korea’s culture scene was a “playground” for Cha and Choi.

Prosecutors are also looking into allegations that the Blue House created the so-called “culture blacklist,” on which actors, directors, entertainers, artists, literary figures and others in the cultural arena who seem to have ideas that the government disapproved of were listed.

According to the testimonies of insiders, the government funded musical performances and artistic projects that Park Geun-hye and her confidantes approved of, or that were directed by those whom they liked.

With Hallyu (or Korea’s entertainment business abroad) facing restrictions in China due to the planned deployment of the Terminal High Altitude Area Defense (Thaad) system as well as the global content business becoming more competitive than ever, many are concerned about Korea’s culture industry.

However, the Ministry of Culture, Sports and Tourism clearly is in no shape to help the sector rebound.

That it was the year of the decline of culture is a bit ironic.

Since inauguration, one of President Park Geun-hye’s key policy directives was “enriching people’s lives with culture.” She called it the “flourishing culture” initiative and it was promoted together with her famous “creative economy” initiative.

For this reason, many of Korea’s culture projects which demanded hefty sums of money were dubbed with adjectives like “flourishing” or “creative.”

But with the whole country furious about the political scandal, projects carrying such names got their budgets cut and were scaled down, if not scrapped altogether.

Top: Artists call on President Park Geun-hye to step down and protest the alleged “culture blacklist” her administration made in front of the Constitutional Court of Korea on Dec. 29. Above: The Park Geun-hye administration made retaliatory measures after the documentary “The Truth Shall Not Sink with Sewol,” also known as “Diving Bell,” was screened at the Busan International Film Festival in 2014. [YONHAP]

In need of direction

Every New Year, the Seoul Arts Center, which operates under the culture ministry, held a New Year’s concert. It has done so every year since 1989, a year after it opened.

This year, however, the Seoul Arts Center didn’t hold its New Year’s concert - the first time in the 29 years since its opening - due to the current situation at the culture ministry. An official at the center said that “every November, a planning session for the concert is held by the education and culture secretary’s office at the Blue House or the culture ministry, but we were notified that due to the circumstances the concert cannot take place.”

In fact, sources say the very character of the New Year’s concert at the center has changed in recent years.

In the past, the concert was a celebratory event where people enjoy music to ring in the new year. But recently, it turned into an event that the president attends, with mottos like ”I Love Korea,” and “Arirang People, Let’s Dream of Unification through Culture.” It was particularly true last year, when people sang the national anthem and the theme was “Flourishing Culture through Creativity and Convergence.”

The celebration for the public have turned into a state event, with only the invited able to attend. The tickets, since President Park Geun-hye’s administration arrived, are not open to the public.

The National Museum of Korea, which also operates under the ministry, seems equally in need of direction.

Towards the end of the year, national museums, as well as private ones, typically announce to the press their plan for the new year. The National Museum of Korea has yet to share their plan. A source said that it’s due to the “circumstances at the culture ministry.”

In March of last year, director Kim Young-na abruptly resigned from the post. Allegations say that she was disapproved by President Park because she opposed holding an exhibition on French jewelry and craft at the museum, which was an idea of Park. Further allegations surfaced that the exhibition was Choi’s idea.

Seoul Arts Center and the National Museum of Korea are just two major instances of cultural institutions in Korea that await approval and direction to plan out the new year amid this whirlwind of political scandal, critics say.

Left: The new national brand campaign - dubbed “Creative Korea” and criticized due to allegations that Cha Eun-taek was behind it - will not be used in Korea, the culture ministry said. Right: The Culture Creative Convergence Center at CJ Entertainment’s building in Sangam-dong, western Seoul. The center’s future is also unclear. [YONHAP]

On Friday, the ministry reported to the Blue House its plan for the new year and conspicuously missing was the phrase “flourishing culture.” The phrase used to dominate the ministry’s plan in the past.

The four main strategies for 2017, according to the report, was to prepare for the PyeongChang Winter Olympics; seek future growth engines in culture; enrich people’s life through culture; and establish credible administrative system.

Yu Dong-hun, the second vice minister, explained “although the phrase ‘flourishing culture’ has a good meaning, it’s related to various suspicions.” He said the ministry “didn’t intentionally try to remove that phrase, but thought its plan could be explained accurately without it.”

The new national brand campaign, dubbed “Creative Korea” was also clearly removed. The new brand was announced last year but was criticized for possibility of copying France’s national brand initiative as well as allegations that Cha Eun-taek was behind it.

Asked about the campaign, which was funded with 7 billion won ($5.9 million), Yu said that the brand will not be used in Korea and abroad as the official slogan for the country. Rather it could be used abroad for some PR activities for the national image.

While the Park Geun-hye administration was aggressive in supporting content-related businesses, as it would contribute to her envisioned “creative economy,” all of the ministry’s ambitious plans for making Korea into the “content hub” have been either scaled down if not scrapped altogether.

The ministry announced on Dec. 21 that it will scale down its envisioned “Culture Creation and Convergence Belt.” Under the original design, there would be five major elements; the Culture Creative Convergence Center; a venture complex for startups; an academy for new talent; K-Culture Valley for shopping malls, hotels, theme parks and concert halls; and finally K-Experience for traditional cultural projects.

The budget for this “Culture Creation and Convergence Belt” has been cut from the original 90.4 billion won to 49.9 billion won. The headquarters that oversaw the operation of this belt, which Cha took helm of, will be abolished.

Of the five elements, only the venture complex and the academy will remain. The rest were in fact pushed by corporations, CJ and Korean Air, under pressure from the Blue House, according to allegations.

Insiders also say, the ministry, for some of its tourism related projects, is thinking of taking out K altogether, as K-Sports was one of the organizations that Choi allegedly headed to interfere with state cultural and sports projects.

Oh Min-seok, a literary critic and professor of English literature at Dankook University, said in his recent column that culture has become an “industry.” “In the past, culture was a periphery of politics and economy,” he said. “But now people recognize its enormous social and political influence. This explains why the Park Geun-hye administration promoted as its key directive ‘flourishing culture.’”

However, without the ministry eliminating the suspicions and doubts that people have about them and regaining their trust and hearts, it seems it’s meaningless what kind of plans it devise for the new year.

Speaking to reporters on Thursday, Ru of the ministry acknowledged that they should work on transparency. “We have yet to come up with specific measures, but we will come up with measures like improving procedures of appointing the heads to lead cultural institutions and selecting companies for cultural projects that we fund.” A more detailed plan, he said, will be announced after February.

Critics say no matter what further political mayhem occurs this year, incidents like the culture blacklist should not happen if the country wants its cultural business to prosper and contribute to the economy.

Although the cases were quite extreme in the Park Geun-hye administration, it’s not the first time that Korea’s culture appointments and projects were designed to satisfy the Blue House and its confidants.

The Roh Moo-hyun administration appointed liberal professionals in the top posts in the cultural arena, increasing financial support for left-sympathizing cultural projects. They, however, were let go as soon as the Lee Myung-bak administration took the helm.

Still, according to Park Yang-woo, professor of cultural policy at Chung-Ang University and president of Gwangju Biennale Foundation, the liberal governments of Kim Dae-jung and Roh Moo-hyun also had conservative cultural policies, like the abolishment of “screen quota” system, under which movie theaters are required to show Korean films for up to 146 days a year. The Lee Myung-bak administration appealed to liberal artists by expanding to the “culture voucher” program that embraced both right- and left-wing artists.

“The policies themselves weren’t liberal versus conservative,” Park, who was a culture vice minister during the Roh Moo-hyun administration, said. “But they just rooted out the people from their opposing grounds.”

Yoon Pyung-joong, the philosophy professor at Hanshin University, said “the art world should remain vigilant so that it doesn’t fall into the temptations, and repeat the same mistake of politics collaborating with the corporate world or the media [for corruption].”