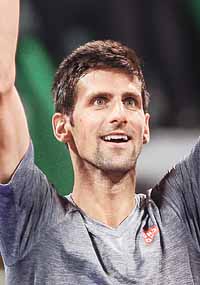 The dramatic match, which showcased the best of men’s tennis for 2 hours, 54 minutes, required Djokovic to need four match points — three in the second set and one in the third — to prevail.

“All the way to the last shot you never know with Andy.”

Djokovic had three match points in the 10th game of the second set, but couldn’t prevent Murray from making it 5-5 and eventually winning the second set.

Murray finally capitalized on his fourth break point — second in that 10th game — with an inside out forehand winner.

Despite going up 0-30, Murray wasn’t able to come up with the same magic when Djokovic served for the match a second time at 5-4 in the third set. Murray also failed to take advantage of a break point in the sixth game of the third set.

“Physically, it was a good test to start the year,” Murray said. “My body feels all right just now, so that’s positive.”

Murray won their last encounter 6-3, 6-4 in the ATP Finals in November. That victory catapulted Murray ahead of Djokovic to the year-end No. 1 ranking for the first time.