After the Samsung Electronics debacle last year surrounding its fire-prone Galaxy Note7, its next model, Galaxy S8, is likely to be a game-changer in the global smartphone market.

If it’s a blockbuster hit with no technical glitches, Galaxy S8 could help Samsung recover an image tarnished by the massive recall and discontinuation of the disgraced Note7 phablet and solidify its status as the leading smartphone producer. Under an opposite scenario, the tech giant will be quickly challenged by its rival Apple as well as Chinese players. The phablet could be released in four months, at the latest.

“For Samsung, the success of Galaxy S8 is critical, given it could be the first and last chance to rebuild brand and confidence,” said Park Hyung-woo, an analyst with SK Securities. The model is also set to become the one and only smartphone that could contain the iPhone 8 scheduled for release fall 2017. Apple is known to be planning a major redesign and upgrade in celebration of the 10th anniversary of the iPhone series, the analyst added.

Samsung has unveiled the flagship Galaxy S series in February on the sidelines of the Mobile World Congress in Barcelona for the past several years but the launch will be pushed to mid-April this year, said a source familiar with the development process. The venue could most likely be New York.

After shutting down the faulty Note7 in November, Samsung began identifying what caused the phablet to catch fire by hiring independent third-parties such as the state-run Korea Testing Laboratory and certification firm UL. A Samsung executive said the process was completed in December and the company could disclose its findings this week, when key executives return from the trip to the Consumer Electronics Show in Las Vegas that wrapped up on Sunday.

“We are revealing the cause [of the problem] to reclaim consumer confidence by admitting we failed to discover the glitch over the course of developing the phone and showing we are making efforts to prevent it from happening again,” he said. “But are not trying to blame someone else,” he added, hinting the problem could have originated from components from an external supplier, although he did not elaborate.

Rumors and speculations about the S8 have been sprouting across the world even though Koh Dong-jin, president of Samsung’s mobile business, warned employees last month to stay quiet about both hardware and software features of the next strategic phone.

Samsung insiders say the new phone will be armed with cutting-edge features but embraces the task of juggling between innovation and quality.

A sneak peek into hardware

The new Samsung flagship phone is expected to add a “Plus” variant that carries a massive 6-inch or 6.2-inch screen, larger than Note7’s 5.7 inches and iPhone 7 Plus’ 5.5 inches. The Plus model may carry an S Pen, a stylus, to fill the vacuum created by the discontinuation of Note7.

There are mixed views on whether both variants will come with a dual-edge curved screen. Its preceding S7 had two versions ? one with a flat display and the other which curved on both edges.

There is a high chance the bezel surrounding the four corners could be removed, effectively realizing a top-to-bottom, edge-to-edge display. Some sources say the phone will even ditch a physical home button for a screen that covers the entire front edge.

A recent technological advancement with the U.S. biometrics solutions giant Synaptics suggest Samsung’s removal of the physical button means embedding an optical sensor to scan the user’s fingerprint underneath the glass on the front of the device.

Synaptics in December unveiled an FS9100 optical fingerprint sensor, which is able to scan the fingerprint through 1 millimeter of “full cover glass and enables clean, button-free industrial designs. The fact that Samsung has used Synaptics fingerprint sensors on previous flagship smartphones from S6 to S7 adds to the projection about S8, which is also underscored by the fact that Synaptics confirmed the sensors are scheduled to sample in the early part of the first quarter and mass production will begin after April.

There are predictions the S8’s audio system will get a noticeable boost with assistance from Harman International, a U.S. audio and automotive component supplier best known for Harman Kardon and JBL, which Samsung announced in November it would acquire. But experts are skeptical about the scenario, given the transaction is expected to close later this year and still needs approval from Harman’s shareholders. 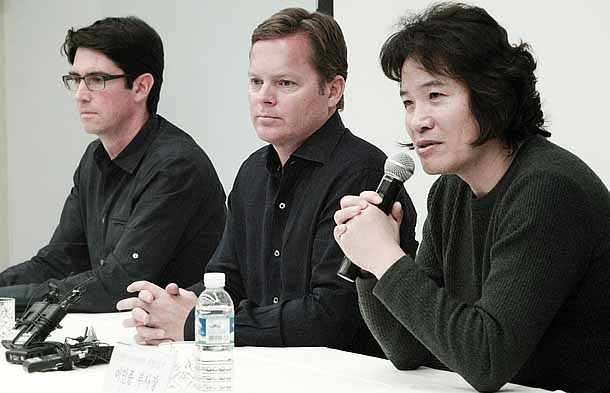 The most attention-grabbing feature of S8 that Samsung has made public so far would be it becoming the first device to be embedded with Samsung’s own voice-powered artificial intelligence interface built in partnership with Viv Labs.

Samsung in October purchased the San Jose, California-based start-up run by the co-creator of Apple’s Siri. Viv has been working on a so-called open AI platform enabling third-party developers to freely plug their service capabilities into the platform.

The deal signals Samsung has jumped into the race for artificial intelligence in the mobile device market by introducing its own proprietary voice assistant - an upgrade from its existing S Voice assistant - against the likes of Google, Apple, Microsoft and Amazon.

“It’s not that the S Voice will be completely ditched,” said a Samsung executive. “Viv will help the existing software get better.”

The S8 “will be significantly differentiated from the current services we see in the market now,” Rhee In-jong, executive vice president at Samsung Electronics, told reporters in November.

A clearer picture of what the collaboration between Samsung and Viv is surfaced as Samsung has been granted several trademark applications to the European Union Intellectual Property Office as well as the Korean patent office since November. The trademarked names include Bixby and Kestra as well as a couple of more spelling variants for Bixby such as Bixbee, Bix-bee and Bix:)by.

Based on the reference to “Star Trek,” Bixby is assumed to be associated with Jerome Bixby, an American writer that produced four screenplays for “Star Trek” episodes in the 1960s, while Kestra could be traced to Kestra Troi, a half-Betazoid, half-human daughter of Human Starfleet officer Ian Andrew Troi. Bixby and Kestra are assumed to be male and female voice egos of the AI assistant.

The trade description refers to them as “software used to operate voice recognition system and operating software for portable telecommunications apparatus and digital electronic products.” And Kendra and Bixby will not only perform the jobs existing voice assistants have been performing - dictation, conversion of speech to text, scheduling of appointments and accessing phone numbers - but also “make hotel and restaurant reservations, search and retrieve information at the user’s specific request via the Internet.” Samsung is also rumored to be working on the technology to process payments based on voice commands.

Viv is already renowned for being particularly useful for transactions. In a demonstration at the TechCrunch Disrupt in New York City in May, CEO Dag Kittlaus asked Viv to pay his friend $20 and a tap of the pay button through an integration with Venmo digital wallet app completed the transaction instantly.

“Perfecting the third-party ecosystem” will be critical to the soul of their mission, said Kittlaus at the demo.

On the back of its strength, the artificially-intelligent platform will later be available on home appliances and many other devices linked to daily lives such as lights and door-lock systems, according to Rhee. And the assistant will perform an unlimited number of services that were available through separate applications, said Viv Labs Vice President of Engineering Adam Cheyer.

Compared to short-term memory-based platforms such as its ancestor Siri, Viv stands out in that it is able to embrace follow-up questions without stuttering for context a user has just given it seconds earlier. The capability is propped up by the so-called “dynamic program generation” technology, which allows the system to understand intent and generate a program itself to best answer the query.

Paul Erickson, senior analyst at IHS Markit, a market research firm, says however that growth in capabilities of the major virtual assistants - and integration of functionality with their respective ecosystems - makes it extremely difficult for new entrants, including Samsung’s, to compete.

“In the near future, we can expect to continue to see these four ecosystem giants - Google, Apple, Amazon, Microsoft - battle for dominance,” he said.

“Siri and Google Assistant are considered to be the two with the best-rounded capabilities, with Google naturally excelling in search and unstructured queries,” he said, adding that Google Assistant has the most potential, currently.

“Artificial intelligence performs better and more accurately when it has more data from which to base its decisions. Of all the players, Google possesses the broadest amount of user data to work with thanks to its software and services ecosystem - Chrome, Gmail, Play Music and Video, Android TV, Search, Maps, Calendar, YouTube and more. This is an advantage none of the other competitors possesses.”

The analyst also noted that the artificially intelligent voice assistant market is expected to be eventually a mix of smart speakers, mobile devices, smart TVs, over-the-counter video devices and even automobiles.

The voice assistant model Samsung is set to roll out with S8 will be the beginning but won’t have “everything yet,” according to Rhee.

Another Samsung executive said an even more advanced version will be available in the mid or latter part of this year.

“We can’t realistically beat Siri and Google Assistant when it comes to voice recognition,” he said. “Samsung has a huge lineup of different consumer products and the assistant will be used to add value to their service and usage.”