Brick-and-mortar shops will no longer be the only go-to place for buying new automobiles, as online e-commerce shops are stepping into the industry as well.

Interpark said Wednesday it would start a retail service for imported vehicles with local company D.parts, which delivers foreign cars to Korean customers and assists with paperwork, tax issues and delivery.

To avoid conflict with local car dealers, the company will offer models that are not included in the list of products officially imported to Korea.

“Buying foreign brand cars that are not dealt by official dealers can be a nuisance for general consumers,” said Cho Jin-hyuk, manager for Interpark’s electronics division. “Because our service is based on collaboration with an experienced company, customers can now buy such products with credibility and convenience on the internet.” 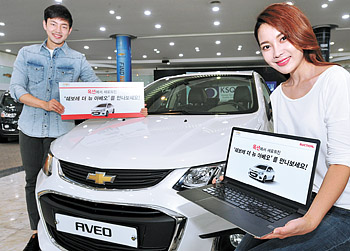 Chevrolet Aveo was sold on the e-commerce site Auction in September. All 10 cars sold out in one minute after the deal was uploaded. [AUCTION]

E-commerce site Ticket Monster (Tmon) is also beginning to sell vehicles online, offering inventory from auto manufacturers inside and outside borders. The company’s brief experience in the market may offer clues about demand. The retailer sold Jaguar XE models in August, for which orders were filled in the first three hours. However, only one eventually completed a purchase after Tmon and SK Encar, agent supplier for the project, bumped heads with Jaguar Land Rover’s Korean office and official dealer Aju Networks.

“We’re looking for a way to talk directly with headquarters without going through any intermediate agents,” said a Tmon spokesman.

Online is the main sales channel for the global electric car brand Tesla Motors which has two showrooms in Korea but doesn’t have an official brick-and-mortar store. Tesla’s stores serve only as showrooms and clients must use the website to order. Demand in Korea was evident last year when pre-orders of the automaker’s Model 3 surpassed 325,000 in the first week.

Although most sales offers are temporary, online retailers are eyeing expansion into domestic car brands. In September, Auction placed 10 models of Chevrolet’s Aveo on its platform, in a deal with GM Korea. The models sold out within one minute, as Auction offered a credit of five million won ($4,195) to buyers on the website.

“We already saw potential, so the company is open for collaboration suggestions as long as the manufacturer is willing to do so,” said Lee Jin-young, a manager for Auction.

Starting next year, domestic cars will be sold on television home shopping channels as laws that prohibited the practice were eased in November.

New sales channels may prove favorable for consumers, as fierce competition will prompt companies to offer discounts or interest-free installment plans, which were common when imported car sales on television were popular in the early 2000s.

“Online sales of automobiles may be a chance to enhance consumers’ convenience and improve the ambiguous structure of domestic vehicle sales,” said Kim Pil-soo, an automotive engineering professor at Daelim University College.

Industry insiders, however, say that there are still many obstacles. E-commerce and home shopping networks equally say that although they are interested in launching online auto sales, the final decision is up to manufacturers and official importers.

Decision makers are not enthusiastic about the idea, as sales online would eventually hurt brick-and-mortar stores and their sales force.

“Realistically speaking, going online is not an easy option as it is a matter likely to be attacked by our labor union,” said a source from Hyundai Motor. GM Korea employees also criticized the Aveo sale on Auction, calling it a death sentence for sales people.

Foreign car brands don’t seem too excited about the idea either, even though they may be able to save 15 percent on the commission fees they pay dealers. Most foreign car brands sign contracts with local dealers. One source pointed out that those vehicles require service after the purchase.

“Dealers have connections to competent car service providers and quality after-service is an essential in this industry, therefore going online may be a risky decision for brand image,” the source added.