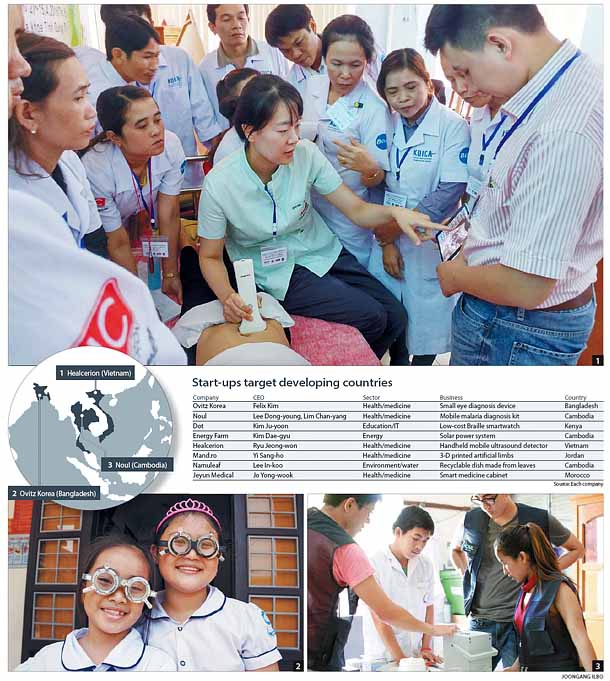 1. Workers from Healcerion, a developer of handheld ultrasound detectors, teach Vietnamese medical staff how to use the device. 2. Children with impaired vision in Bangladesh put on eye diagnosis spectacles from Ovitz Korea. 3. An employee from Noul explains how to use the start-up’s malaria diagnosis kit in Cambodia. [JOONGANG ILBO]

Lee Dong-young, a researcher at Seoul National University’s Biomedical Research Institute, was volunteering in the eastern African country of Malawi when he came up with his start-up idea: creating a faster and easier way to diagnose malaria.

Early detection is key to curing the infectious mosquito-borne disease that kills roughly 600,000 to 700,000 people a year, mostly in developing countries, according to the World Health Organization. Current diagnoses, though, can take up to an hour and require observation through a microscope.

To simplify the process, Lee’s start-up, Noul, developed a mobile device that shaves the diagnosis time to 15 minutes. Lee and his business partner, Lim Chan-yang, began distributing their malaria diagnosis kit in farming areas around Cambodia. The start-up gained recognition from the United Nations, which selected it as one of the 15 most remarkable innovators at the Science, Technology, and Innovation Forum last June.

Noul is one of many Korean start-ups founded by young entrepreneurs interested in tackling social issues around the world, especially in developing countries. Their business model and products are geared toward improving living conditions among the world’s most disadvantaged.

Ovitz Korea manufactures a small affordable device for eye diagnoses and distributes it in Bangladesh. Their motto: “Your vision is our vision.”

“I decided to start my own company because I felt we couldn’t solve the problems of disadvantaged groups with high-priced products,” said Felix Kim, CEO and founder of Ovitz.

Over 300 million people in developing countries suffer from impaired vision because they don’t receive regular eye diagnoses, according to the company. Existing devices for eye diagnoses cost around 15 million won ($12,500). “We have developed our own product prototypes and aim to sell our device at one-tenth the price of existing devices in the market,” said Lee Sung-min, general manager at the start-up.

Another medical diagnosis start-up, Healcerion, developed a handheld ultrasound detector that can help with pregnancy check-ups in areas without big hospitals. The company is currently supplying its ultrasound system to 7,000 health centers in Vietnam and teaching nurses how to use them, said Ryu Jeong-won, CEO of Healcerion.

Dot, a start-up that produces Braille smartwatches, is planning for distribution in Africa, where there are more than 11.6 million visually impaired people, according to CEO Eric Ju Yoon Kim. Starting with Kenya, Kim said he hopes to improve people’s living conditions by providing low-cost Braille watches. The company’s so-called refreshable Braille technology allows the watch to display different words on its surface as people touch it, allowing them to read long strings of information in Braille.

In Morocco, Jeyun is hoping to eradicate tuberculosis. The start-up came up with a smart medicine cabinet that tells patients when it’s time to take their medicine. The company says timely medication is crucial during the first six months of treatment. Jeyun selected Morocco because of the country’s high recurrence rate of tuberculosis.

Medical devices start-up Mand.ro is producing 3-D printed artificial limbs for Syrian refugees who have lost arms and legs during the country’s ongoing civil war. The company mainly does business in refugee camps in Jordan. An artificial arm can cost around 40 million won, but 3-D printing lowers the cost significantly to 1 million won.

In Cambodia, Namuleaf has developed a biodegradable dish made from leaves that decomposes 60 days after being thrown in the soil.

With so many Korean entrepreneurs eager to step foot in developing countries, government organizations and private incubators are lending a hand. One major supporter is D.Camp, a co-working space operated by the Banks Foundation for Young Entrepreneurs. The organization provides start-ups with office space, consulting and funding.

“More young people are trying to solve problems in developing countries by starting their own business,” said Jin Seung-hoon, a manager at D.Camp. “We think these start-ups are an important part of the start-up ecosystem and actively support them.”

Many Korean entrepreneurs have been influenced by innovative social enterprises from the United States and Europe that have reshaped ideas of foreign aid and development.

In the past, governments in the United States and Europe pushed forward projects to build schools and hospitals in regions lacking infrastructure and supplied those countries with food and medicine. Governments soon found there were limits to this method as infrastructure was not the only problem. From social and political issues to religion and economic policies, various factors influence the well-being of a country, and physical support alone was not enough to solve the problems of the developing world.

Since 2010, a new approach has emerged, the so-called social enterprise that draws upon private-sector practices to solve social, cultural and environmental problems.

One French start-up sought to reduce childhood deaths from diarrhea in Africa by putting toys inside transparent soap and encouraging them to wash their hands more frequently. In one African village where the soap was provided, the death rate fell significantly.

The Korea International Cooperation Agency, the government’s foreign aid agency, was inspired by the example. “While Koica had done many projects, there have been difficulties that remain unsolved up till now,” said Kim Sung-do, a manager at Koica. “We decided to actively support young entrepreneurs with innovative ideas because we thought they had a chance of breaking through.”

Noul, the malaria diagnosis start-up, was part of Koica’s first batch of teams in the program. It received 300 million won from the agency to produce product prototypes.

Though they might be small markets now, developing countries have a vast amount of potential for growth. Economists describe markets with low-income consumers, those earning less than $3,000 a year, as the bottom of a pyramid. That is, what they lack in spending power, they make up in population size. There are currently four billion people earning less than $10 a day, which the World Resources Institute categorizes as being the bottom of the pyramid. That population makes up a $5 trillion market, the institute said in a 2007 report.