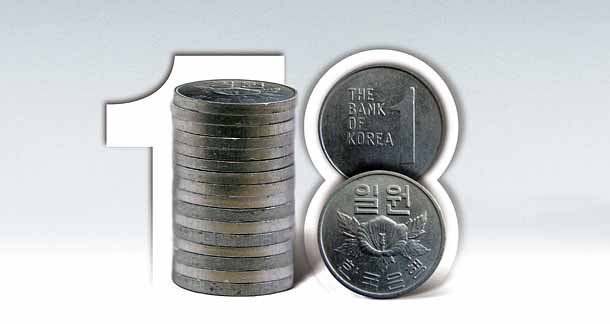 People have found a new and novel way of venting their fury at politicians: giving them 18 won (1.5 cents).

Since an unprecedented abuse of power scandal erupted in October that led to an impeachment against President Park Geun-hye and exposed a mountain of irregularities in political circles, people have started making public donations of 18 won to lawmakers they despise. A special target are ruling Saenuri lawmakers who appeared to oppose the impeachment of the president.

The number 18 in Korean is a homonym for a vulgar curse.

Rep. Pyo Chang-won of the Minjoo Party of Korea released a list of ruling party lawmakers whom he identified as pro-impeachment, anti-impeachment and undecided lawmakers in the days leading up to the Dec. 9 impeachment vote, which was by secret ballot. The list was later updated by internet users to include lawmakers’ mobile phone numbers.

Those branded as unlikely to vote in favor of impeachment soon found themselves flooded with 18-won donations and angry protest text messages. Many ruling party lawmakers including former Saenuri chief Lee Jung-hyun were forced to change their phone numbers.

Opposition lawmakers were not spared from the message firestorm. Rep. Park Jie-won of the People’s Party also received a flood of angry text messages when he refused to rally his party members to vote on the impeachment motion on Dec. 2. Park later rallied behind the Dec. 9 vote.

Aides of lawmakers are appealing for restraint. “We are not legally bound to send receipts (for 18-won donations) but as we receive tons of phone calls demanding them, we can’t do our daily work here,” said one aide. In fact, to mail a paper receipt for an 18 won donation costs more than 18 won, not to mention the labor expended.

Park Won-ho, professor of politics and diplomacy at Seoul National University, said there was a positive aspect to the 18 won phenomenon as it signals wider public participation in politics.

“In the past, it required money to mobilize the public to a political cause. But what we are seeing now is the emergence of a so-called ‘smart democracy’ springing up voluntarily at virtually no cost,” said the professor.

The new form of protest is expanding. Supporters of presidential frontrunner Moon Jae-in of the Minjoo Party are deploying it against figures calling for constitutional change before the presidential race, which Moon is against. His supporters think a constitutional change would diminish his chances of winning the presidency and is politically motivated to weaken Moon’s standing.

Rep. Kim Boo-kyum of the Minjoo Party recently fell victim to Moon’s supporters, receiving over 3,000 text messages over a couple of days. Kim criticized a report drawn up by a Minjoo research center that advocated a Constitutional change to allow Korean president two four-year terms. That kind of amendment is seen as positive for Moon’s presidential prospects.

Rep. Kim lashed out, saying it was “foolish” for the party to produce such a report as if Moon was already the party nominee.

Watching his supporters vent their anger at a fellow Minjoo lawmaker, Moon called for restraint.

Chin Jung-kwon, a liberal arts professor at Dongyang University said people should watch their language, but their freedom of expression should never be restrained. “Lawmakers who despise 18 won donations should not have joined politics in the first place,” said Chin.