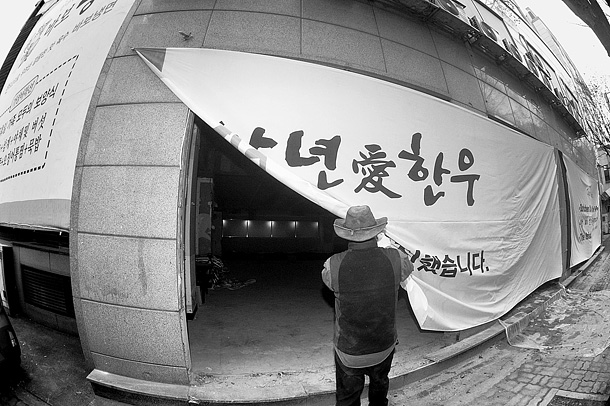 A restaurant owner in west Daejeon, who saw sales plummet due to the antigraft law, is converting one floor of the restaurant into a fusion restaurant. “I had to let go of five workers out of nine,” said the owner, Choi Gwang-choon. “All beef restaurants will close down if it keeps going on like this.” [KIM SEONG-TAE]

It has been just over 100 days since the Improper Solicitation and Graft Act, better known as the Kim Young-ran Law, was implemented on Sept. 28 and the four most common reactions by the public at large are tears, smiles, tricks and cynicism.

Many small businesspeople have shed tears over lost sales, from florists to cattle ranchers. Some have reason to smile, especially restaurants and pubs where the cost of food and drink is lower than the limits imposed by the law. In some restaurants, tricks are used to get around the limits, like splitting the bill into segments and paying several times.

The cynicism is generated by the abuse of power and influence peddling scandal that led to the impeachment of President Park Geun-hye. The allegations against her and her inner circle are of abuses far greater than expensive meals.

Choi Gwang-choon, owner of a beef restaurant in west Daegu, started remodeling his two-story restaurant in December. The new fusion restaurant will sell pizza, steak and coffee on the first floor and beef on the second floor. “We sold 40 million won worth of beef meals in December, which was a 77 percent reduction from December 2015,” said Choi. “We would have ended up closing down completely if I just kept selling beef, so I decided to change my business altogether.”

Choi is lucky to still have a business to run. Many restaurants shut down after the law came into force. Namgang, a quality restaurant in central Seoul went out of business on Dec. 31. Since its opening in 1975, the restaurant was popular for its bulgogi.

“After the Kim Young-ran law, we started seeing fewer people come in big groups and some days, we made less than half the amount we used to,” said Yoo Yi-sang, former manager.

In a shopping center near the Sejong Government Complex, about 30 percent of the shops are empty. Kim, a 55-year-old restaurant owner in the area, said, “Some evenings, we have no customers at all.”

According to a special year-end report by the Korea Food Service Industry Research Institute surveying 709 restaurants across the country, restaurants reported an average sales decline of 36 percent in December 2016 compared to the same period in 2015.

Orchids, commonly sent to congratulate people for a promotion, are noticeably absent in public offices. A director of a bureau in the Daejeon City Government who got promoted on the first day of the year only received three congratulatory orchids.

“My predecessors got at least 70, but I barely got any,” said the director. A police superintendent who took up a new job on Dec. 13 received no orchids at all.

“Our sales have gone down 80 percent since the Kim Young-ran law,” said Shin Kyeong-ho, owner of a flower shop near the Daejeon City Government.

Not all restaurants are having a hard time. Some have actually managed to find a silver lining by selling cheap food and providing soju for free.

A Korean restaurant in Suwon, Gyeonggi, provides 13 dishes such as bulgogi and marinated crab at 15,000 won per person, and its 100 seats are always full at lunchtimes. “I come here often because the food is very good too,” said Mr. Lee from the Gyeonggi County Council. A jokbal place in central Seoul is giving each table a pot of dumpling stew for free along with the ordered jokbal dishes.

Many office workers say the law has given them back a life outside the office since so much entertainment has been ditched. “I go home early and walk around or exercise with my wife,” said a worker at the Gyeonggi Provincial Government.

Some have found loopholes in the law. In some expensive restaurants in Seoul, the owners sell their customers gift cards for 50,000 won, and the customers use it to settle the bill. Under the law, the limit for a gift, 50,000 won, is higher than the limit for a meal, 30,000 won. Businessmen who eat with public officials can give them the gift cards as presents.

Then there’s the split - splitting a bill many times into segments under 30,000 won and paying them separately. An official working at the Daejeon Government District said, “We make separate payments two to three times before the meal when we eat expensive things like beef, which cost more than 30,000 won per person.”

The widespread abuse of power and influence peddling scandal dubbed Choi-gate has people skeptical about the whole idea of cracking down on graft by worrying about restaurant bills and wedding presents while 1970s-style corruption is still going on at the top.

“Powerful officials are committing irregularities worth billions of won, and small business owners are about to go broke because of 50,000 won gifts,” said Bae Jung-jin, an owner of a corner shop in west Daejeon. “What meaning does the Kim Young-ran law have in this kind of situation?”

Experts call for a revision of the antigraft law. Song Joon-ho, a business professor at Anyang University and also an advisor to the Anti-Corruption and Civil Rights Commission, said, “Parts of the ordinance need to be revised so that the damage to people’s livelihoods can be minimized, especially around the small- and medium-sized businesses.”

“[The law] needs to start by being strictly implemented among high officials above level four,” said Lee Sang-min, a lawmaker from Daejeon.

In a report given at the meeting of five economic departments held at Seoul Government Complex Thursday, it was suggested that the ceilings on the prices of gifts and meals allowed be increased according to the inflation rate.