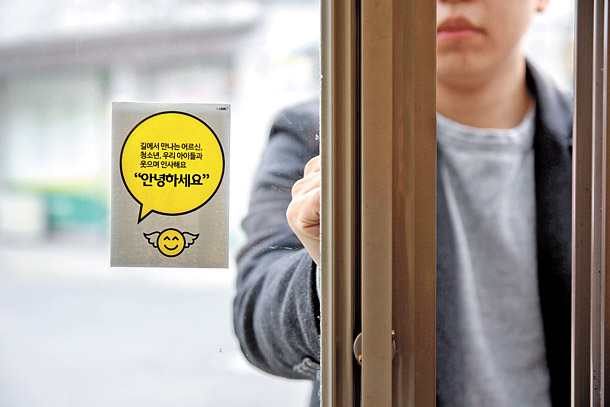 A man opens the door of a cafe with an Annyeonghaseyo sticker on it in Yeonnam-ro, Mapo District, western Seoul, on Dec. 19. [KWANGWOON UNIVERISTY]

When the Bridge of Life campaign was launched in September 2012 on Mapo Bridge in western Seoul, the idea attracted much attention as it was the first anti-suicide campaign to be carried out on a bridge.

The idea was to decorate the guardrails of the bridge with warm-hearted phrases such as, “How was your day today?,” “You’ve been through so much” and “Have you eaten?”

At first, it received positive reviews from the public, but whereas the campaign saw Mapo Bridge nicknamed the Bridge of Life, it is now known as the Bridge of Suicide. According to the Seoul Metropolitan Fire and Disaster Headquarters, the number of attempted suicides there have gone up from 12 in 2012 to 194 in 2015.

Experts say the cause is what’s called the white bear problem, or the ironic process theory, in which the intentional suppression of a certain thought actually makes it more likely to surface, as when someone says, “try not to think of a polar bear.”

In other words, the signs that were supposed to stop people from thinking about suicide resulted in encouraging them.

“A direct message of consolation at a place where people have come to attempt suicide has in fact turned out to have a negative effect,” said Lee Jong-hyuk, professor of communications at Kwangwoon University. “What’s more important is communicating with neighbors that they’re not alone.”

The Ministry of Health and Welfare reported that two out of three people who attempt suicide do so because of depression, loneliness or relationship problems.

Lee is leading a campaign named LOUD, first started by the JoongAng Sunday in January 2015 to promote communication between people.

Last year, the campaign put stickers on elevators inside apartment buildings with greeting messages on them. This year, the campaign has prepared another project called Annyeong-haseyo, or “hello,” which aims to help people feel less neglected.

Project Annyeonghaseyo has taken last year’s campaign a step further by reaching out to the whole city. The project’s ultimate goal is to create a friendly environment where it becomes natural to say “hello” to anyone in the streets, hence the theme.

The project was inspired by a similar one that took place in 2014 in the United States called Just Say Hello. Sanjay Gupta, a neurosurgeon and media reporter at CNN, came up with the idea that, “just saying hello to someone could have a positive effect on those who feel lonely and even prevent disease.”

The aim of LOUD was similar - to give people a chance to talk to each other about their feelings by saying “hello.” For this, Lee and his team of public communication researchers have worked with the Siheung City Government in Gyeonggi to make posters to put around city streets.

The message is clear: A yellow smiley face with wings on each side, saying “hello” as written on the speech bubble above it. Underneath the smiley character it reads, “A guardian angel smile that gives energy to the heart. A healthy word to share with the neighbors, annyeonghaseyo.”

This poster has been placed at around 500 locations throughout Siheung, on public-office notice boards, apartment buildings and shops.

Campaigners have also printed 1,000 stickers that look similar to the posters and gave them to passengers on Yeonnam Road in Mapo district, western Seoul, on Dec. 19. The small stickers, about the size of the palm of one’s hand, were made with aluminum-based material so that they will not be easily damaged or removed.

Reactions have so far been positive.

“A smile is just pleasing to look at,” said Kim Sang-hoon, who runs a junk shop in Siheung, “I feel happier.”

“People who saw the same stickers would start saying hello to each other,” said Park Young-soo, an office worker living in Mapo.

“It’s really natural for people to say hello when they make eye contact in other countries,” said Kim Ro-sa, a university student. “But in Korea, we just walk by with an awkward expression. I think this will be a good way to start saying hello to each other.”