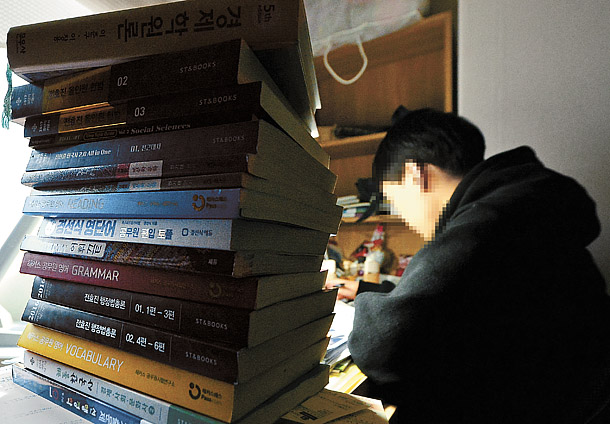 The frosty air didn’t stop the two women, heaving bags filled with preparatory books for the civil service exam, from wearing slippers on their way to a library - likely a sign they weren’t going to re-emerge from it for hours.

The two said they moved a few months ago into Noryangjin in southwestern Seoul, known as the hub of civil service exam preparation for its cheap one-room apartments, cafeterias and private cramming schools. An expression of gloom hung over them, not an unusual countenance among those who study for the exam, but their eyes glimmered as they spoke.

“We are going to get this right in a year,” said the 27-year-old gongsisaeng, the name for some hundreds of thousands of Koreans studying for the civil service exam. “Did you know nearly half of those who pass the exam have done it within a year of studying for it?”

“How long you study for the test does not determine your success,” said a 26-year-old gongsisaeng, who graduated from the same university as the other woman and now lives with her in a one-room apartment that costs 400,000 won ($333) a month. “It would be a dream-come-true to pass the exam before my friends land jobs.” 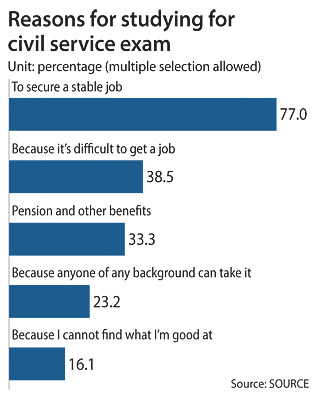 A 31-year-old surnamed Yoo is one of those who have been trying to pass for years. This year is his fifth attempt.

“My cousin keeps asking me come back home and work with him at his store,” Yoo said. “I continued this far because my score was always so close to passing every time, I just thought if I try another year, I would pass.”

He added, “I don’t regret having become a gongsisaeng, but the repeated failures do make me feel insignificant and unimportant in this world.”

Long gone are the days when economic growth was above 10 percent annually for years. According to Statistics Korea, the unemployment rate for those aged between 15 and 29 hit 8.2 percent in November, the highest it has been since the rate hit 8.8 percent in 1999, after the Asian financial crisis.

“At least one thing is guaranteed in the civil service exam,” said another 27-year-old gongsisaeng surnamed Jang in her one-room apartment that fits barely one bed and a desk. “It’s equality. People who get a certain score pass, while people who don’t are ruled out. Whether your parents are rich, what school you went to, and what you look like on the outside doesn’t matter here.”

“People say practice makes perfect, but you come to a point when you have to admit it’s not working,” she said. “You try anything for two years and if you don’t get it, then it’s officially a failure. I figured it’s no good to keep going at it this way, and that’s why I came here.”

Ever since moving into the one-room apartment five months ago, Jang spends her time studying at a cram school from 7 a.m. to 3 p.m. everyday before returning to her apartment and spending hours studying before she goes to sleep. She takes her meals at cheap cafeterias near her cram school.

Other gongsisaengs also see the exam as a way out of unemployment.

“The highest GPA and Toeic [English language test typically required by companies in Korea] scores, licenses and awards, internship and other types of investments, even how you look, cannot guarantee you a job at a conglomerate,” said a 31-year-old also studying for the civil service exam. “Instead of wasting your energy on these things, it’s better to study for the civil service exam, where all you need to worry about it testing well on your own.”

The younger generation’s unprecedented interest in becoming civil servants has sparked criticism, as some see them as seeking only a comfortable and stable life. According to Saramin, an online portal website that provides information on vacancies across various industries, 77 percent of 1,174 people said they are preparing for the civil service exam “to secure a stable job.”

“Don’t you understand?” Jang said when asked about the stereotype against gongsisaengs. “We are not trying to find anything more stable compared to another option. We are out of options. For people like us, the civil service exam is the last way out, and that’s why we stake our lives on it.”

Some people even quit their jobs to jump into this pool.

“I was shocked to find out that my first monthly salary was only 1.8 million won,” said another 31-year-old gongsisaeng, who quit his job at a medium sized company one year into it. “But what really drove me out of that place was the fact that my boss, who has been around for more than 10 years at the company, was only being paid 2.5 million won a month. I quit, realizing there is no economic stability or personal growth to be expected there.”

“I didn’t quit but was kicked out,” said another gongsisaeng surnamed Gong. “I worked at a small advertising company for some 17 hours a day, was paid 1.5 million won a month, and still I worked hard. But when my probation period ended, the company asked me to leave. Welcome to the real world.”

“If this sense of instability continues in the job market for the youth, their desire to secure only the jobs that are known to be stable, like those at the government, will rise rapidly,” said Oh Chan-ho, a researcher at Sogang University’s Institute of Social Sciences. “It is imperative the government establishes a responsive policy to the mass youth unemployment.”

The National Assembly on Tuesday decided to extend for two years a policy requiring public organizations and companies to allot at least 3 percent of its new hires to young adults. The Ministry of Employment and Labor projects that some 25,000 new jobs will be created for the youth this way, but admits its effect may not last.

“Without a systemic restructuring of the job market, any policy to address the youth unemployment will not solve the crux of the problem,” said an official of the ministry. “But a bill to reform the job market is deadlocked at the Assembly, and we will have to do with such policies for now.”

Simply creating more jobs may not be the answer to many small-and-medium enterprises (SMEs).

According to a survey on 182 SMEs by Saramin, 75.3 percent said they are “having a hard time finding employees to hire.”

“Policies need to address the wage gap between SMEs and conglomerates,” said Park Jong-kyu, senior research fellow at the Korea Institute of Finance. “Without a flexible labor market backed up by policies and legislation, the state of youth unemployment cannot be solved.”

“The job market must be reformed to ensure that employees with similar levels of skills and experience are paid equal amounts of salary across various companies,” said Kwon Soon-won, professor of business administration at Sookmyung Women’s University. “This will help conglomerates share jobs with smaller companies and create more jobs for all.”